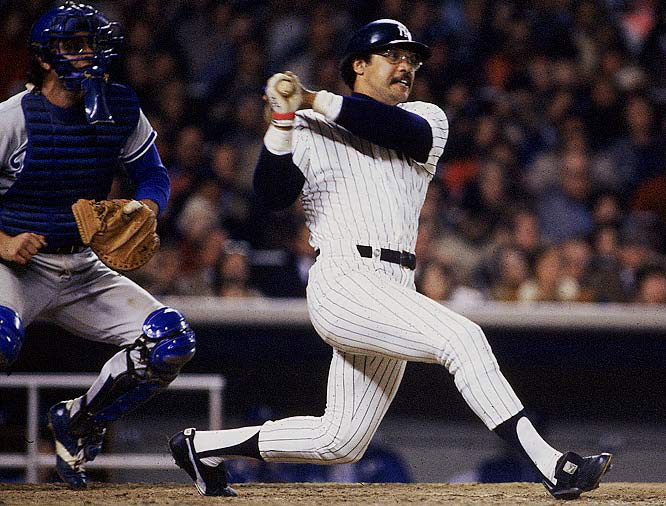 The Library of America presents Smith’s finest work in the new collection, American Pastimes: The Very Best of Red Smith. It is available now and a must-read for all sports fans, young and old (and an ideal gift for Father’s Day). This week, with permission from Smith’s family, we’ll reprint a Red Smith column every day to offer you a sample of what he was all about. Today’s column is “The Moving Finger Writes, Etc.” which ran on October 19, 1977, the day after Reggie Jackson hit three home runs on three pitches in the deciding game of the World Series.

So, enjoy, and for more on Smith, check out this oral history from Jerome Holtzman’s classic,No Cheering in the Press Box; this excerpt from Stanley Woodward’s memoir, Paper Tiger; anice tribute by his son, Terrance Smith; and this excerpt from Dan Okrent’s introduction toAmerican Pastimes. ‘Course it goes without saying that if you want to know from Red Smith you need to go find a copy of Ira Berkow’s excellent biography, Red.

It had to happen this way. It had been predestined since November 29, 1976, when Reginald Martinez Jackson sat down on a gilded chair in New York’s Americana Hotel and wrote his name on a Yankee contract. That day he became an instant millionaire, the big honcho on the best team money could buy, the richest, least inhibited, most glamorous exhibit in Billy Martin’s pin-striped zoo. That day the plot was written for last night—the bizarre scenario Reggie Jackson played out by hitting three home runs, clubbing the Los Angeles Dodgers into submission, and carrying his supporting players with him to the baseball championship of North America. His was the most lurid performance in seventy-four World Series, for although Babe Ruth hit three home runs in a game in 1926 and again in 1928, not even that demigod smashed three in a row.

Reggie’s first broke a tie and put the Yankees in front, 4–3. His second fattened the advantage to 7–3. His third completed arrangements for a final score of 8–4, wrapping up the championship in six games.

Yet that was merely the final act of an implausible one-man show. Jackson had made a home run last Saturday in Los Angeles and another on his last time at bat in that earthly paradise on Sunday. On his first appearance at the plate last night he walked, getting no official time at bat, so in his last four official turns he hit four home runs.

In his last nine times at bat, this Hamlet in double-knits scored seven runs, made six hits and five home runs, and batted in six runs for a batting average of .667 compiled by day and by night on two sea-coasts three thousand miles and three time zones apart. Shakespeare wouldn’t attempt a curtain scene like that if he was plastered.

This was a drama that consumed seven months, for ever since the Yankees went to training camp last March, Jackson had lived in the eye of the hurricane. All summer long as the spike-shod capitalists bickered and quarreled, contending with their manager, defying their owner, Reggie was the most controversial, the most articulate, the most flamboyant.

Part philosopher, part preacher and part outfielder, he carried this rancorous company with his bat in the season’s last fifty games, leading them to the East championship in the American League and into the World Series. He knocked in the winning run in the twelve-inning first game, drove in a run and scored two in the third, furnished the winning margin in the fourth, and delivered the final run in the fifth.

Thus the stage was set when he went to the plate in last night’s second inning with the Dodgers leading, 2–0. Sedately, he led off with a walk. Serenely, he circled the bases on a home run by Chris Chambliss. The score was tied.

Los Angeles had moved out front, 3–2, when the man reappeared in the fourth inning with Thurman Munson on base. He hit the first pitch on a line into the seats beyond right field. Circling the bases for the second time, he went into his home-run glide—head high, chest out. The Yankees led, 4–3. In the dugout, Yankees fell upon him. Billy Martin, the manager, who tried to slug him last June, patted his cheek lovingly. The dugout phone rang and Reggie accepted the call graciously.

His first home run knocked the Dodgers’ starting pitcher, Burt Hooton, out of the game. His second disposed of Elias Sosa, Hooton’s successor. Before Sosa’s first pitch in the fifth inning, Reggie had strolled the length of the dugout to pluck a bat from the rack, even though three men would precede him to the plate. He was confident he would get his turn. When he did, there was a runner on base again, and again he hit the first pitch. Again it reached the seats in right.

When the last jubilant playmate had been peeled off his neck, Reggie took a seat near the first-base end of the bench. The crowd was still bawling for him and comrades urged him to take a curtain call but he replied with a gesture that said, “Aw, fellows, cut it out!” He did unbend enough to hold up two fingers for photographers in a V-for-victory sign.

Jackson was the leadoff batter in the eighth. By that time, Martin would have replaced him in an ordinary game, sending Paul Blair to right field to help protect the Yankees’ lead. But did they ever bench Edwin Booth in the last act?

For the third time, Reggie hit the first pitch but this one didn’t take the shortest distance between two points. Straight out from the plate the ball streaked, not toward the neighborly stands in right but on a soaring arc toward the unoccupied bleachers in dead center, where the seats are blacked out to give batters a background. Up the white speck climbed, dwindling, diminishing, until it settled at last halfway up those empty stands, probably four hundred fifty feet away.

This time he could not disappoint his public. He stepped out of the dugout and faced the multitude, two fists and one cap uplifted. Not only the customers applauded.

“I must admit,” said Steve Garvey, the Dodgers’ first baseman, “when Reggie Jackson hit his third home run and I was sure nobody was listening, I applauded into my glove.”

Today’s column is ”The Moving Finger Writes, Etc.” which ran on October 19, 1978, the day after Reggie Jackson hit three home runs on three pitches in the deciding game of the World Series.

Also, Reggie was counting his homers, two fingers, not a V for Victory sign. So interesting to see how the obvious can be missed, even by the all time greats.

Had forgotten that it was 4 in a row (over 2 games). Love Garvey's comment.

I don't think I ever screamed louder at my TV than that night. Woke up the baby, the wife wasx ready to shoot me.