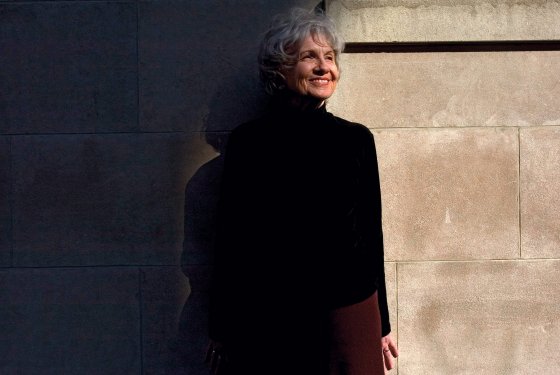 Alice Munro has won the Nobel Prize for Literature.

MUNRO: I write every morning, seven days a week. I write starting about eight o’clock and finish up around eleven. Then I do other things the rest of the day, unless I do my final draft or something that I want to keep working on then I’ll work all day with little breaks.

INTERVIEWER: Are you rigid about that schedule, even if there’s a wedding or some other required event?

MUNRO: I am so compulsive that I have a quota of pages. If I know that I am going somewhere on a certain day, I will try to get those extra pages done ahead of time. That’s so compulsive, it’s awful. But I don’t get too far behind, it’s as if I could lose it somehow. This is something about aging. People get compulsive about things like this. I’m also compulsive now about how much I walk every day.

INTERVIEWER: How much do you walk?

MUNRO: Three miles every day, so if I know I’m going to miss a day, I have to make it up. I watched my father go through this same thing. You protect yourself by thinking if you have all these rituals and routines then nothing can get you.

INTERVIEWER: After you’ve spent five months or so completing a story, do you take time off?

MUNRO: I go pretty much right into the next one. I didn’t use to when I had the children and more responsibilities, but these days I’m a little panicked at the idea of stopping—as if, if I stopped, I could be stopped for good. I have a backlog of ideas. But it isn’t just ideas you need, and it isn’t just technique or skill. There’s a kind of excitement and faith that I can’t work without. There was a time when I never lost that, when it was just inexhaustible. Now I have a little shift sometimes when I feel what it would be like to lose it, and I can’t even describe what it is. I think it’s being totally alive to what this story is. It doesn’t even have an awful lot to do with whether the story will work or not. What happens in old age can be just a draining away of interest in some way that you don’t foresee, because this happens with people who may have had a lot of interest and commitment to life. It’s something about the living for the next meal. When you travel you see a lot of this in the faces of middle-aged people in restaurants, people my age—at the end of middle age and the beginning of old age. You see this, or you feel it like a snail, this sort of chuckling along looking at the sights. It’s a feeling that the capacity for responding to things is being shut off in some way. I feel now that this is a possibility. I feel it like the possibility that you might get arthritis, so you exercise so you won’t. Now I am more conscious of the possibility that everything could be lost, that you could lose what had filled your life before. Maybe keeping on, going through the motions, is actually what you have to do to keep this from happening. There are parts of a story where the story fails. That’s not what I’m talking about. The story fails but your faith in the importance of doing the story doesn’t fail. That it might is the danger. This may be the beast that’s lurking in the closet in old age—the loss of the feeling that things are worth doing.

INTERVIEWER: One wonders though, because artists do seem to work to the very end.

MUNRO: I think it’s possible that you do. You may have to be a little more vigilant. It’s something I never would have been able to think of losing twenty years ago—the faith, the desire. I suppose it’s like when you don’t fall in love anymore. But you can put up with that because falling in love has not really been as necessary as something like this. I guess that’s why I keep doing it. Yes, I don’t stop for a day. It’s like my walk every day. My body loses tone now in a week if I don’t exercise. The vigilance has to be there all the time. Of course it wouldn’t matter if you did give up writing. It’s not the giving up of the writing that I fear. It’s the giving up of this excitement or whatever it is that you feel that makes you write. This is what I wonder: what do most people do once the necessity of working all the time is removed? Even the retired people who take courses and have hobbies are looking for something to fill this void, and I feel such horror of being like that and having that kind of life. The only thing that I’ve ever had to fill my life has been writing. So I haven’t learned how to live a life with a lot of diversity.