Winter Meetings: (Is It Over Yet?) 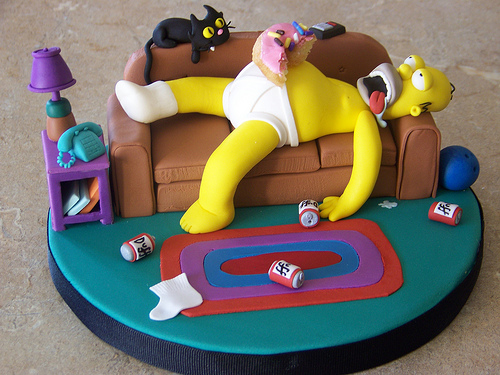 I'm guessing Cashman is under the impression he can get a good pitcher for Gardner, or maybe Phillips' demand to be paid to approve the trade killed it.
Either way, I'm glad to see Cashman being slow to move Gardner. Would be helpful to keep him around.

day-two with the Homer-erotic art?!

On the surface you gotta do Gardner for Phillips. So yeah, if Phillips wants more--he seems to be a guy who always feels disrespected, doesn't he?--I see how that could kill the deal.

[1] & [3] I think the fact that Phillips might just suck killed the deal. Have you seen his stats lately? Is it better to trade Gardner to pay Phillips or keep Gardner and pay Infante (less than phillips)?

Let's not forget, Gardner is still the starting LF on the 2014 team. It's not like there's a Puig pushing him out of town or anything.
The Yankees can be just fine with Gardner and Ellsbury catching everything in left and center. If the Gardner/Granderson/Swisher outfield saved a lot of runs, I have high hopes for the Gardner/Ellsbury/Betran OF.

Gardner better bring back something huge in order to justify downgrading to a Soriano/Suzuki platoon in LF. And that seems unlikely since he is a free agent next year.

yeah, as much as I'd prefer they keep Gardner and move one of the old outfielders, I realize he's our best trade piece. I'd probably take Phillips for him, but while Omar Infante is still on the market, he's less of a priority for the Yankees than a pitcher. And when he asks for more money to approve the trade, eff 'em.

[3] On the surface you gotta do Gardner for Phillips.

• Gardener is the Yankees only moderately "young" cost-controlled position player, if by young we mean 30 y.o. He was their second best player last year and plays good defense. But he's the only trading chip and trading him would free up the logjam of OFs (if by logjam we mean finding playing time for Soriano, Ichiro and Wells).

• And remember, Wells and Ichiro (and his two year deal) are on the roster because apparently the Yankees had no one in the minors who could replicate their performance.

Yep, this sounds like a deal the Yankees simply have to make. Or really any deal that involves getting rid of Gardner to make room for the other guys.

The Yankees should bring in a few ringers. Professional baseballers. We'll give them token jobs at the plant and have them play on the team. Honus Wagner, Cap Anson, Mordecai "3-Finger" Brown...

Gardner is simply a player I want to see remain on this team. Pushing him out the door to "make room" for inferior personnel to play his position would be throwing bad thinking after bad planning.

Team isn't going to compete for what matters (winning the WS) for a few years. Develop talent.

12) i would do only do that deal if we have to throw in Pineda, after investing in his rehabilitation.

joel sherman has more on the gardner-phillips non-trade:

[14] i would do only do that deal if we have to throw in Pineda, after investing in his rehabilitation.

Hughes and Joba I wish nothing but the best, but Joba...it just became so exhausting after a while.

I know the popular opinion was the Yankees "screwed him up," but I only buy that up to a certain point. How they dealt with him wasn't THAT different from how the Twins transitioned Johan into a starter. It's just that Joba wasn't very good. At some point it was on Joba to perform. I also think injuries (THANKS PUDGE!) played a bigger role than anyone would ever admit. Who knows, maybe he can grab onto the closer's role in Detroit or something. But I think we've all seen Joba's best major league moments, I don't think there's any kind of renaissance in the offing.

As for Hughes, I'm a bit more optimistic. He is who he is at this point, but to me he's one of those guys who (while never spectacular) will end up having a pretty respectable career when all is said and done. He'll bounce around and maybe even luck into the occasional 15 or 16 win season on an NL team at some point. He wont be what we wanted him to be, but when all is said and done he'll end up pitching for 15 years.

Yankees have offered Infante 24 million for 3 years. If he were to accept, and Arod were to be suspended for the enitre season, my crude calculations have the Yankee 2014 payroll at 186.5 million. About $2 million left to sign a third starter or make a July upgrade.

Given that, apart from robertson, the entire bullpen is league minimum at this point, I think the Yankees are giving 189 a real go of it.

I've come to the conclusion that 189 pisses people off more on principle than because anyone truly believes you have to spend MORE than that to win a championship.

I want to be clear, I don't think the New York Yankees should be in the business of pinching pennies. But shit...if you can't win a championship on a $189 million payroll, then the payroll isn't the problem.

[22] teams win titles w/ less payroll all the time. the *yankees* cannot win titles in the near future at less than 189 because 130 of that is already accounted for by players declining much faster than they figured and no impact minor leaguers anywhere near the majors.

Well, if the Yankees are even remotely counting on Arod being suspended for all of 2014 to make the 189 threshold, boy, howdy, have I got a bridge for them!!!

[24] Leave it up to A*rod to screw it up - he'll get suspended just enough to come back in August, tying up lots of $$$, and then break his hip two weeks later.

And I don't care what the salary ceiling is; with CC, Kuroda, and Nova, even if we make the post season, we won't get far.

[23] You are so right. I think we're looking at a generational failure here. So long as they spend big bucks on aging vets to fill the holes, they won't be able to compete with other clubs who realize that you grow some good talent, then sign them young to long term contracts and let somebody else (like the Yanks) pay for their past performance.

So far Jack Z has:

So yeah...have fun with that.

thought the M's management had an interesting take: Cano is a "bargain" for the first half of the contract, and by the second half, salaries will have gotten so high that it'll seem reasonable.

Robbie: “I didn’t feel respect. I didn’t get respect from them and I didn’t see any effort,” Cano said.

Thelarmis: "I count 175 million attempts at respect. Fuck you, Robbie. Enjoy the rain, the losing and the long plane rides."

If you wanna feel disrespect and call out a lack of effort, I've got a few college students I can introduce you to...

ooh, robbie is rockin' that AWFUL Fat Liar facial hair he grows in the offseason. good lord that shit is ugly!!!