Nothing a good beatin’ won’t fix. 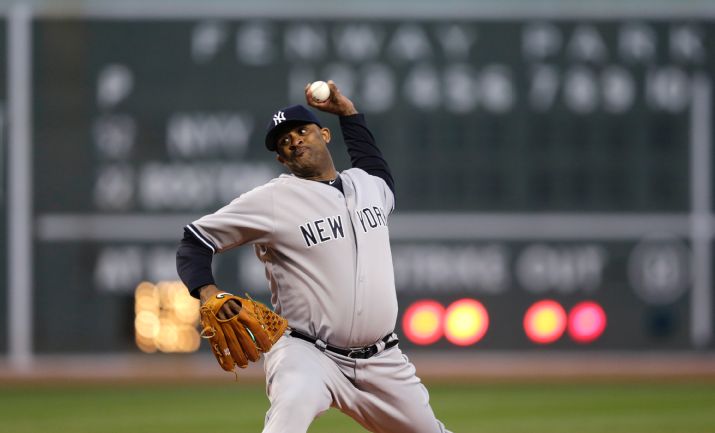 It being Spring Break in our school district, my wife and I took our two younger children to spend the afternoon looking at fossils at the La Brea Tarpits and fine art at the L.A. County Museum of Art. (The oldest was actually in Boston as part of a school trip, but sadly not at Fenway Park.) I had dutifully set the DVR before leaving home, but I was pleasantly relieved when we walked into a hipster burger bar late in the afternoon and saw that the Yanks were already up 4-0 on the Red Sox. It was 7-2 by the time we finished the burgers, so I was relaxed enough to be a good husband and father as we strolled leisurely up and down Larchmont Boulevard, poking our heads in a dress shop here, a gluten-free bakery there. It was a beautiful California evening, made all the more glorious by the beating going on three thousand miles away.

I had seen only bits and pieces of the early scoring between bites of my burger, so I started the game from the first pitch once we got home. The Yankees scored their first run when Alfonso Soriano uncoiled on a Felix Doubront pitch and blasted it deep into right centerfield for a double that drove in Carlos Beltrán with the first run of the game.  Beltrán had reached on an error by shortstop Xander Bogaerts, the first of five Boston errors on the night.

The Yanks picked up three more runs in the second, and again the rally was keyed by some shoddy Boston defense. With Brett Gardner on first, Brian Roberts grounded to Brock Holt at third. Holt fired to second, looking to start a 5-4-3 double play, but Dustin Pedroia took the throw as he came across the bag and dropped it while making the transfer to his throwing hand. Middle infielders have always been given the out on plays like this, but a new rule this season dictates that these transfers must be sound to earn the out at second base, and Pedroia was charged with the error. Instead of having the bases empty with two outs, Doubront faced Yangervis Solarte with no outs and runners on first and second. After the runners moved to second and third on a wild pitch, Solarte rifled a double down the left field line, scoring both. Three batters later he’d score the game’s fourth run on another wild pitch from Doubront. It would be that kind of night for the Bosox.

There was more of the same in the third inning. First, Mark Teixeira hit a pop-up to left field that cleared the Green Monster by about six inches for the first Text Message of the season, but then the Yankees went back to Plan A — putting the ball in play and letting the Red Sox fielders kick it around. With one out, Gardner hit a dribbler just to the right of the mound. Doubront bounced over with plenty of time to make the play, but instead he let it roll through his legs untouched. Gardner stole second without a throw, took third on the next pitch, then scored when Roberts singled on the pitch after that, and it was 6-0. Roberts would eventually steal second and then score two batters later on a Jacoby Ellsbury single to put the Yankees up by seven.

All of that would’ve been plenty for most pitchers, and it was certainly enough for the reinvented C.C. Sabathia. He coasted through the first two innings and only ran into a bit of trouble in the third when the Sox used a walk, two doubles, and a sacrifice fly to put together two runs that did little more than allow Michael Kay to remind us that no lead is safe at Fenway Park. Even though C.C.’s pitch count was slightly elevated, he was still able to use all the pitches in his arsenal to keep the Boston hitters off balance for six innings. He had a wild pitch, and he hit two batters while walking three, but only yielded three hits and tallied eight strikeouts, five of them looking. On a day when the Yankees got official word of Michael Pineda’s ten-game suspension and Ivan Nova’s impending season-ending surgery, Sabathia’s outing was a welcome relief.

But since five-run leads aren’t safe in Fenway Park, the Yankee hitters went to work again in the top of the seventh, and again the Red Sox helped them out. Brian McCann led off by poking a single through the wide-open left side of the shifted infield, and Gardner followed that with a walk. Roberts came up next and grounded a potential double-play ball to third, but Holt fielded it with his knee for Boston’s fifth error, and the bases were loaded. After that it took just six pitches for the Yankees to score five more runs and suck all the drama out of the game. Solarte singled to right to score two, Ellsbury lashed a ground rule double just past the Pesky Pole for another, and Derek Jeter roped a single up the middle to plate two more. Just like that the Yankees were up by ten, 12-2.

The Yanks got a little sloppy themselves after the seventh inning stretch, giving up three runs, but they got one back in the eighth and it was 13-5.

I can’t imagine too many folks were still watching at this point, but if you were one of those who clicked off the set, you missed some pretty good stuff. We heard about how Al Leiter broke his nose in the minor leagues (a line drive off the bat of Roberto Kelly during batting practice) and David Cone’s lament that his favorite Manhattan bar tender is set to retire on Friday night, but then it got even better.

First, outfielder Mike Carp came in to try out his knuckleball in the ninth inning for the Red Sox. It didn’t go well. He walked Teixeira, but when he somehow got McCann to ground into a double play, it looked like he might have something to brag about for a while. But then he walked Garnder. And he walked Roberts. And he walked Solarte. And he walked Ellsbury to force in the Yankees’ thirteenth run. It looked like the inning might never be over, but Kelly Johnson, pinch-hitting for Jeter, popped up to end the carnage.

Ah, but then it got even better. With David Robertson on to pitch for the fist time since returning from the disabled list, I started thinking about how nice it was that the Yankees had taken five of their first seven games against the Sox, and how satisfied Jacoby Ellsbury must have been after his first three games as a Yankee in Fenway Park (5 for 15, 3 doubles, a triple, 5 RBIs). But then I noticed something — directly behind home plate there was a young couple who had clearly just claimed the best seats in the house. They were both on their cell phones, frantically waving at friends through the television screen, until the gentleman asked the lady to stand and got down on bended knee. As Robertson delivered a 1-1 pitch, the guy presented his girl a ring, she accepted his proposal, and the cluster of fans behind them cheered in appreciation. I don’t share this because I’m some kind of hopeless romantic (well, maybe I am), but because I like thinking about this couple and the idea that one day their children will ask them about how they got engaged. The father will have no choice but to say, “I asked your muthah to marry me on a night when the fuckin’ Yanks kicked our ass, 14-5.”

Haha. Love the future memory of the proposal!

What's really cool is that in this early part of the season, both the Sox and the Yankees have had out-of-position players pitch. Teddy baseball pitched for the Sox, as did the Babe. And the Babe pitched for the Yankees, too, after he gave up the mound for homers.The Mick wanted to, but Casey wouldn't let him. Rocky Colavito did two innings. Stan the Man pitched. Wade Boggs. There are many.

Who is your favorite?

I wish the happy couple a lifetime of beatings like they sat thru last night.
Good stuff, Hank.
Larchmont was my old stomping grounds, if you can call such a genteel blvd a stomping ground, from 96 to 99. Worked on the Paramount lot, and lived in a Hancock Pk condo.
I was the guy who walked to work in LA. The tar pits and burgers is a terrific afternoon.

My DVR ended at the 4 hr. mark, so I missed the proposal. Nice writeup Hank! Ironically, I am from Larchmont, NY but now live in LA.

I have been to Boston many times in the fall and spring, and I have to say that 40 degrees in Boston can feel like 10 degrees in other places. It chills you fast. I think that is why CC hit a couple batters, (first time in 15 games, that he hit anyone). The Sox defense was a mess, and Jeter also booted a few.

Not sure if you noticed but Jeter did this eye roll thing that made me think that he was a little pissed about not getting to hit against Carp. If he falls 1 hit short of 200 or 2 RBI's short of a round #, he might look back on this night. Despite not getting to pad his stats against Carp in the 9th, I am sure he was happy to have his jacket on again.

[2] I was there the night in Anaheim when Boggs pitched. Somehow I didn't notice his walk to the bullpen to warm up, so I was confused when, in the bottom of the eighth inning of a dismal game, all the Yankee fans down the right field line stood and cheered as the next guy came in from the pen. Soon enough I noticed that it was Boggs, and that inning was so much fun that the previous seven hardly mattered. I stood and cheered every pitch, and the pro-Yankee crowd erupted when he struck out Todd Greene for the final out.

[3] Believe it or not, I had never been to Larchmont before. But LA's like that. It's so sprawling that you could never experience every corner of it.

[4] I noticed it. My first thought was that Pete Rose would have strangled his manager in that situation. Give away a shot at a free base hit? But Jeter isn't chasing anything, probably never has been, so I can't imagine he cared. I think the eye roll was probably out of context and about something else.