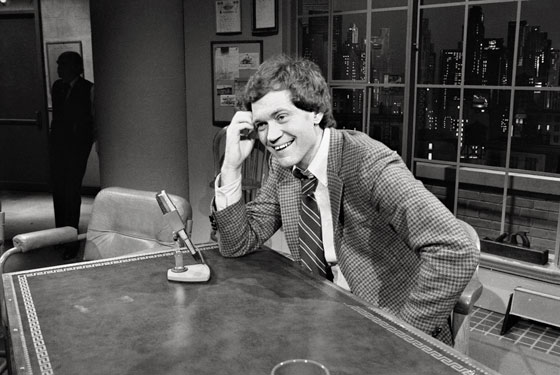 Over at the Stacks I curated this 1981 Esquire gem by the late Peter W. Kaplan:

When David Letterman enters a small club, other young comics make way for him, and although he moves among them, he is separate. They haven’t hosted The Tonight Show and he has. The other young comics have to beg audiences for their attention at lonelier clubs, on later nights, attacking them, splaying their personalities onstage. They do imitations of Bigfoot in different dialects, they imagine the Elephant Man doing ads for the Chrysler K-car, they evoke and torture their parents’ domestic intimacies before a high, dark room full of people in Westwood or Santa Monica or Hollywood. Blinded by a spotlight, a young comic stands on a stage and calls jokes into the night, waiting for the laughter, hearing his own voice in its terrifying clarity—a sound garnished by a few low coughing chuckles from the crowd. “So you hate me,” the young man says with sweaty anger. “What do I care? Anyone got a cigarette?” He is given one. “So you hate me… so I’ll talk to my dick.” He pulls his waistband and talks down into his crotch. “Hello, Poky!” he says. “How are you Poky? Jump, Poky. Please?” There’s a silence, and the young man glares out into the black. “I always get best when I feel mean,” he says, and resumes talking to his crotch. The audience turns its head and coughs.

No such quiet fills a room when David Letterman comes through a curtain; quiet skitters away like many fleeing waiters. People yell, “Hey-yo!” and they yell, “How hot was it!” They seem to feel very close to Letterman indeed, and he stands and laughs in his white sweater and blue jeans and swings the microphone around like the old pro he’s practicing to be. “Hey-yo!” a straggler calls. “What a fine crowd,” Letterman says, and that gets the laughs it seeks. The audience is all in favor of allowing Letterman to make them laugh; they know he’s funny. He just has to talk, and they work so that he’ll acknowledge them. “This is more fun,” Letterman tells the crowd, “than humans should be allowed to have.” They laugh and clap. “Hey-yo!” someone yells.

Other young comedians come and go. They work the rooms and they yearn for their moment under the television lights—the moment that can turn them into paradigms of our age, the names cut into the marble walls of our culture halls: BRENNER. CHASE. KLEIN. Some can do dialect humor, others can simulate young people on drugs for an audience’s satisfaction, others can insult their wives. None of them will do anything that really hurts because that would keep them off television and push them into selling aluminum siding (which DANGERFIELD almost had to do).

The comedian who can make it on television is the one who can preside over the talk show landscape. He’s the comedian who can keep things going and react to the traffic of guests sitting down on and leaving a couch; he’s the comedian who represents security and durability to a network. Who knows, who even cares anymore, whether Johnny Carson is actually funny? We know that we like to laugh with him, but who knows whether he actually pushes the catch lever that leads to the joy-pain spasm? He is, more than anything, a triumphant and reassuring habit; he can react and act with the flow of the society, and because of that he’s worth more than any eight sitcoms.

David Letterman is that sort of good horse, the good choice in the morning lineup to provide thirty or forty or fifty years of solid, non-scalding comedy for national consumption. Like Carson, he knows that the long run is left to those who know to hold off and save it for the stretch. He’s not the one to wing it up toward the sun or to kill the audience a thousand times and himself last. When he works an audience, Letterman works at half speed so that he can generate while he goes; it’s the broadcast tradition of the talker. He goes on and on when he works, sending tendrils out into an audience, practicing. Just a funny guy is David L., just a firm hand who keeps his hostility in check, unsheathing, like Carson, a measured fury, and this restraint is what entitles him to the right to endure in a television age. Someone’s yelling “Hey-yo!” at Letterman, and because of that, all of that, NBC is paying him one million dollars a year. Letterman will inherit the air and the cables, gather his resources, and almost never reach for the emergency weapon—the lethal anger behind the sheet of glass—that the smartest ones keep in reserve for the moment of crisis when they doubt, and so need to demonstrate, that they are unchallengeably in charge of their audience.