Here We Are Now, Entertain Us 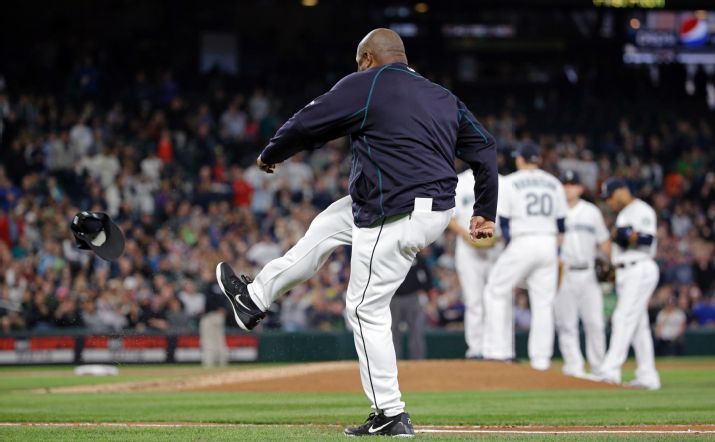 So what was the bigger surprise, the Yankees torching Felix Hernández on Monday night or Stephen Drew coming through with two clutch hits on Tuesday night? Well, let’s just say that if you were to play that exacta at Pimlico, you’d be buying drinks that night.

CC Sabathia and Seattle’s Mike Montgomery came out strong, trading zeros over the first two innings, but things got a bit crazy in the top of the third. With one out and a 3-2 count, Brett Gardner fouled off four straight pitches before getting fooled by the tenth pitch of the at bat. He tried to check his swing, but his bat clearly broke the plane of the plate. Gardner lowered his head and took two steps across the plate towards the Yankee dugout, but then home plate umpire Mike DiMuro sent him to first. Ball four.

Replays showed what everyone knew to be so. Gardner had struck out, but instead he was trotting to first base, and Seattle manager Lloyd McClendon wasn’t happy. Even amateur lip readers were able to easily make out his loud complaint, “He was going back to the dugout!” Well, now he was standing on first.

Two batters later it was Alex Rodríguez’s turn to stir the pot a bit. A-Rod checked his swing on another 3-2 pitch, and again the Yankees received the benefit of the doubt. It was ball four. (It should be noted that these were two different umpires and that replays seemed to show that A-Rod had checked his swing.) McClendon shot out of the dugout like a George Brett and raced towards first base umpire Will Little. Little listened for about two seconds before tossing him from the game, and somewhere in the commotion someone had also ejected Mariners’ catcher Mike Zunino, so McClendon figured he’d get his money’s worth. He crossed the diamond to engage Randazzo and then had a visit with DiMuro behind the plate, yelling, spitting, and kicking at all three stops. As he finally left DiMuro and headed to the clubhouse, he gestured angrily at the three umpires in question and yelled out, “All three of you!”

It’s easy to see how a young kid like Montgomery, pitching in his first major league game, might be a little rattled by all that, so it came as no surprise when Mark Teixeira jumped on the first pitch he saw and rocketed a double down the left field line to score Gardner. The Yankees led, 1-0, and I’m sure something in the Seattle clubhouse paid the price for it.

Sabathia, meanwhile, was pitching pretty well. He gave up a single run in the bottom of the third when the M’s strung together three hits by Austin Jackson, Robinson Canó, and Nelson Cruz, but that was all. Once again Sabathia was pitching well enough to be winning, but once again he wasn’t. After the bottom of sixth, he’d be losing.

With two outs and a runner on first, CC gave up a single to right to put runners on first and third. Girardi came out and lifted Sabathia in favor of David Carpenter, who proceeded to give up a run-scoring double to Austin Jackson. Mariners 2, Yankees 1.

The score stayed right there until the ninth inning. Facing Seattle closer Fernando Rodney, who’s been fairly awful this season, the Yankees manufactured a rally. But with two outs and runners on first and third, Stephen Drew walked up to the plate with the fate of the game resting squarely on his shoulders.

Drew quickly fell into a 1-2 hole, and Rodney was poised to shoot another arrow into the night. Instead, Drew pounced on the next pitch and roped a ringing double down the line in right to the tie the game at two. A stranger thing I’ve never seen.

Dellin Betances brought his spotless ERA out of the bullpen for the bottom of the ninth, and for a moment it looked like the Mariners might get the best of him. Jackson walked to lead off the inning and then stole second on the first pitch to Seth Smith, but Betances easily struck out Smith and then dominated Canó, ending the at bat with two fastballs, one at 99 mph and the next at 98, that simply overpowered Robby as he struck out. Nelson Cruz grounded out, and the threat was over.

The Yankees had a golden opportunity to jump ahead in the top of the tenth. Garrett Jones singled and Teixeira drew a one-out walk, bringing Chase Headley up to the plate. Headley smashed a one-hopper directly at first baseman Logan Morrison, but the play didn’t unfold as you might have expected. Morrison took a look at second to see if he could cut down Teixeira, but when he reached into his glove for the ball, the ball squirted free and fell to the infield dirt. By the time he picked it back up, Morrison had no play and the bases were loaded.

All Beltrán had to do was lift a fly ball into the outfield and the Yankees would have a 3-2 lead, but he wasn’t able to do that. He rolled a soft bouncer up the middle where Canó gobbled it up to start an inning-ending 4-6-3 double play.

In the eleventh, once again it was Stephen Drew. Ol’ Reliable stepped to the plate and with two outs and two strikes he dug deep and came up with a clean single to right. Gardner followed that with a double to the gap in left center, and suddenly the Yankees were in business. Garrett Jones came to the plate knowing that all he needed was a ball that found the outfield grass, but he ended up getting much, much more. Lefty Joe Beimel had been brought in to face the left-handed Jones, but he gave up his advantage by starting Jones out with two balls to run the count to 2-0. His next pitch ended up in the seats 401 feet away, and the Yankees were finally ahead, 5-2.

In perhaps the most bizarre incident of this crazy night, Andrew Miller actually gave up two hits and a run in the bottom of the eleventh, but he was able to right the ship and bring home the 5-3 win. You know, because that’s what he does.

Well, I'll be damned. I turned it off when they were tied. I was sure they would lose it.

No way I could have stayed up for the end, so just as well I didn't start watching.
Is that our first extra inning win of the season?

Holy mackerel. I went to bed with the good guys losing 2-1. Reading the end of last night's thread just now was great. And lest anyone think I would seriously compare Didi and Jorge, that is not the case. My lone point in using them in the same breath is that they are both terrible base runners. Completely and hopelessly terrible. lol.... : )

Nice to win the game, with heroics from the non-likeliest of players; but Seattle's ineptitude and luck was the primary reason for the Yankee win. The Yankees made three errors, numerous base running mistakes (Didi's falling down was more than comical) and other apparent mental lapses. Even Gardner didn't know how many outs there were on one of his outfield catches. Winning helps disguise the mess, but a mess it was. The late hour on the east coast kept the spectical out of view for most.

[yawn] just sorta got up after stayuing up till 2:30 to watch it! Retirement is not so bad.

I can't believe I left out the bit about Didi's baserunning adventure. I can only offer this excuse -- I feel like a middle reliever who's pitched five of the last six nights. Writing these west coast recaps, I've been up late all week -- can't tell you how excited I am that it's a day game today.

Anyway, here's what happened with Gregorius. In the top of the seventh, still trailing, 2-1, Gregorius led off with a pinch hit single. John Ryan Murphy came up behind him and floated a single to short right center. Gregorius got a great read on it and cruised around second on his way to third. The Yanks were about to have runners on first and third with no one out with the 9, 1, and 2 hitters due. But after Gregorius took two strides past the bag at second, he crashed to the ground as if he had been shot in the back. The throw came into second and he was tagged out easily to kill what would've been a promising inning. The YES crew ran the play back and forth more times than the Zapruder film, and Bob Lorenz kept offering various theories about what might've gone wrong -- clipped the bag, shortened his stride, tried to avoid the fielder -- until John Flaherty interrupted him. "Wow, you're a really nice guy. He just took a header!" That was about right.