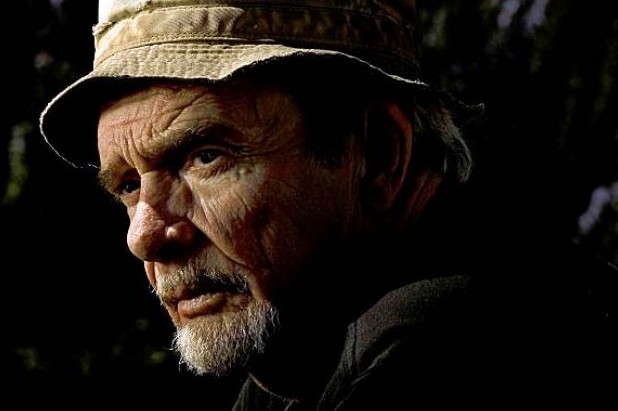 Need another reason to love Longform? How about this reprint of Bryan Di Salvatore’s massive 1990 profile of Merle Haggard?

In Hampton, Virginia, at five o’clock one drizzly, cool January morning, Theresa Lane, Merle’s girlfriend (no one addresses Merle as Mr. Haggard, though his friends often refer to him as Hag), summoned me by phone to Merle’s bus. As I walked across the parking lot of the Coliseum Sheraton a half hour later, the Strangers’ bus was the silent, dark one. Merle’s emitted a dim golden glow and rumbled on high idle. Theresa, a tall, slim, attractive woman in her late twenties, with tousled blond hair and muscular arms and shoulders, met me at the door and escorted me through the living room and down the narrow hallway, past a framed photograph of Hank Williams and another of Dolly Parton, into the kitchen, where Merle sat on the floor, his eyes closed and his bare legs stretched straight out under a small table. Naked except for a plaid flannel shirt and après-ski boots, he greeted me with a slight nod. I took a seat at the table, summoning faith in what one of the Strangers had told me months earlier at a Merle Haggard-Willie Nelson concert in Las Vegas—“Don’t knock on his door if he don’t tell you to. Don’t not knock on his door if he does tell you to”—and Theresa stood behind Merle to knead his shoulders, now and again pulling his head up hard, until his neck was stretched taut.

“Goddam, my head feels like it oughta be lifted right outa my skull,” Merle said. He reached for a pack of unfiltered cigarettes and a lighter on the table, where several packs were scattered among cigarette papers, sheets and scraps of notebook paper, cassette tapes, and empty cassette cases. On the counter were a few dirty dishes, glasses, and some silverware.

I asked Merle how they were biting back at Lake Shasta, near his home in Northern California. He has a houseboat there, and has sponsored several bass-fishing tournaments in recent years.

“I’ve hardly fished this last year or so,” he said, in a deep, barely audible monotone. “I been spending my time teaching her”—he motioned toward Theresa—“songwriting.”

I asked about the fortunes of the band’s softball team.

“We hardly play one game a year. The insurance company says there’s a lot of talent out there ready to break a leg.”

I asked to see some of his poems, which he had read on a recent television special. He thought Bonnie Owens, his backup vocal, longtime singing partner, and ex-wife (he has three, and is currently married to Debora Parret, who was in California at the time), had them at her house, near Lake Tahoe.

I asked about the plot of his unfinished novel, “The Sins of John Tom Mullen.”

“It’s about a teenager falsely accused of rape. They find out the rich boy in town done it, and they trace him by his tire tracks. I haven’t touched it in maybe fifteen years.”

I asked if he wanted me to come back later.

He looked up, as if surprised, and his voice rose slightly. “No, no, ask away.” He turned to Theresa. “That’s a lot better, baby,” he said. “You want to make us some breakfast?”

Theresa nodded and took two short steps to the refrigerator. She was shoe­less and wore a man’s long-sleeved white shirt and gartered black stockings. Merle folded his legs under him slowly, groaned, pushed himself to his feet like a stove-up yogi coming out of a trance, and walked down the hallway. He returned wearing gray sweatpants and slid into a narrow banquette behind the table. The room, snug as a ship’s cabin, grew hazy with smoke from frying potatoes and Merle’s cigarettes. The hum of an exhaust fan harmonized with the drone of the idling bus.

Merle coughed a deep, rasping cough—and looked at the cigarette in his hand. “I liked these things before I even started smoking,” he said. He speaks in a thick, nasal Southwestern drawl-twang, dropping most of his final “g”s, and turning “think” into “thank” and “thank” into “think.” The trip to put on his pants had seemed to wake him up. “But I believe myself and a lot of people will live to be a hundred years old. My blood pressure is one hundred eighteen over seventy-eight. I got the cholesterol of a twenty-one-year-old, and I can still run a hundred-yard dash and beat most people. I know that because last summer it was one hundred fifteen degrees, and I bought two ice creams and sprinted with ‘em back from the store to the grandkids. That was—oh, eighty, a hundred yards, and I didn’t even have to open my mouth to get air. My grandfather entered an old man’s race—you had to be a fifty or older to enter—and he waxed their ass. That’s when he was seventy-four.”