Tag: catcher in the rye 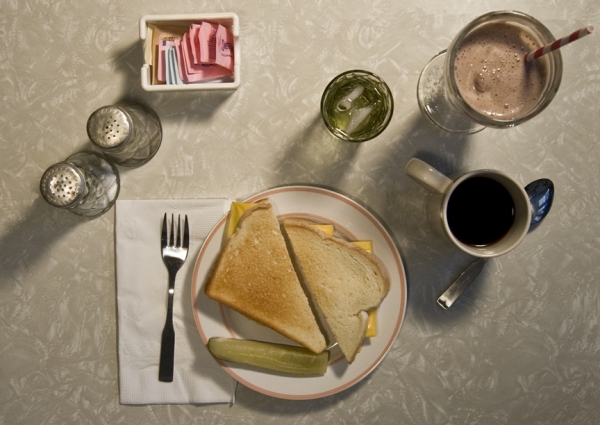 Dig this! A series of fictitious dishes designed by my cousin Dinah.

A WORLD OF MY OWN DESIGN

My parents were devoted newspaper readers. They subscribed to two newspapers everywhere we went. In L.A., it was the Times in the morning and Hearst’s Herald Express in the afternoon. When I was 11, I started delivering the Herald: 77 copies Monday through Saturday from, if I recall correctly, 75th Street and Florence Avenue, between Crenshaw Boulevard and 8th Avenue, in Inglewood. I can’t tell how many stories about pachuco gang fights in East L.A. I hurled onto lawns with my trusty right arm. It was the same stuff I read about when I was home. I was a monkey-see, monkey-do kid, so, following my parents’ lead in my own particular way, I’d spread the paper on the living room floor and scan everything that was in it, right down to Sam Balter’s sports column and the ads for a downtown burlesque house that booked big-time strippers like Lili St. Cyr. I was aware of the bald-headed row long before I knew about “Macbeth.”

Although I mentioned Sam Balter, I’m not sure any of the L.A. sportswriters really registered on me when I was a kid. I remember Balter mainly because he was an ex-USC basketball player who played in the Hitler Olympics and broadcast the Trojans’ games. He certainly wasn’t a great prose stylist. In the Fifties, the brightest lights in L.A. sportswriting were Maxwell Stiles at the liberal Mirror and Morton Moss at the Examiner, Hearst’s morning paper. When I’ve had reason to go back and look at the Times from that era, it had a truly dreadful sports section. Jim Murray didn’t start writing for it until after we moved to Salt Lake. Bad timing on our part, because he took the sportswriting world by storm.

There were books in our house, too, of course, even though neither of my parents had made it past the eighth grade. They were from families where work came before education, and yet they made it perfectly clear that I was going to get the kind of education they never had a chance for. I have a hazy memory of my mother reading me “Treasure Island” and “Robinson Crusoe” and “Swiss Family Robinson,” and then handing me the books to see how well I could read from them. That’s probably why all these years later, I never go anywhere without a book. It probably helped, too, that I walked past a small public library to and from my way to Lutheran school. When I started going nuts about baseball, I would check out player biographies and histories of the game. One day I marched up to the checkout desk with “The Hank Sauer Story”–he presumably merited hard-cover immortalization because he was the National League’s 1952 MVP–and the librarian gave me the thrill of my young life. She said Hank lived on the same block she did. How great was that? But I never asked if she would introduce me or get me an autograph. I never hopped on my bike and tried to track old Hank down. I was going to get the kind of education that had eluded them.

It becomes more and more clear to me how much I lived in a world of my own design when I was a kid. The one year I was in junior high in L.A., I read 100 books in addition to whatever I had to read for class. Lots of Hardy Boys mysteries, lots of John R. Tunis, which was predictable for that time, but also lots of Duane Decker, who wrote about a fictional team called the Blue Sox, with Marty (Beef Trust) Blake at first base and the octopus-armed Patsy Bates (a guy, definitely a guy) at shortstop. I’m sure I read a pile of sports bios, too, you know, so I’d know the right thing to say when I was a big-league star who had his own biographer. I did a lot of dreaming like that, particularly when I was out on my paper route, riding my bike up and down those streets.

The first serious author I read-–Updike doesn’t count because “Rabbit, Run” was so far over my head-–was J.D. Salinger. No surprise there unless you consider the fact that I fancied myself more jock than anything else when I discovered him in my junior year of high school. Some seniors on the football team turned me on to “Catcher in the Rye” and I became a fan for life. The guys who told me I should read Salinger were an interesting group: one was the son of one of my future professors at Utah, another was the son of a sports columnist at the afternoon paper in Salt Lake, and I’ll be damned if I can tell you what the third kid’s father did, although he may have been an academic, too. What these guys were telling me and another friend who fell under their spell was that it was okay to nurture an intellectual streak and play sports, too. It was certainly a message no high school coach I played for was ever going to deliver.

As far as finding newspaper writers in Salt Lake who inspired me, fat chance. There were two editors from the Salt Lake Tribune who moved on to have splendid careers, Bob Ottum as a very stylish writer of skiing and auto racing at Sports Illustrated and Hays Gorey as a Washington correspondent for Time. (I went to high school with Gorey’s son, who always seemed incredibly grounded and preternaturally mature.) But I don’t think I ever saw their bylines in the Trib. And the sportswriters at the Trib and the Mormon Church-owned Deseret News were primarily living, breathing examples of how not to practice your craft. Once in a while, the Trib ran a Jim Murray column, but more often it relied on Arthur Daley, the New York Times snoremonger, for an out-of-town voice. That should tell you all you need to know about local tastes.

When I was in college, I interviewed with the editor of the Tribune, a sallow, pinch-faced gentleman who looked like a good laugh might kill him. He asked me what I wanted to do in the business and I told him I wanted to be a syndicated sports columnist. As soon as the words were out of his mouth, I knew that I was a dead man in his eyes. In Salt Lake’s newspapers, you dreamed of life beyond the city limits at your own peril.

Click here for the full “From Ali to Xena” archive.

In the autumn of 1950, at his home in Westport, Connecticut, J. D. Salinger completed The Catcher in the Rye. The achievement was a catharsis. It was confession, purging, prayer, and enlightenment, in a voice so distinct that it would alter American culture.

Holden Caulfield, and the pages that held him, had been the author’s constant companion for most of his adult life. Those pages, the first of them written in his mid-20s, just before he shipped off to Europe as an army sergeant, were so precious to Salinger that he carried them on his person throughout the Second World War. Pages of The Catcher in the Rye had stormed the beach at Normandy; they had paraded down the streets of Paris, been present at the deaths of countless soldiers in countless places, and been carried through the concentration camps of Nazi Germany. In bits and pieces they had been re-written, put aside, and re-written again, the nature of the story changing as the author himself was changed. Now, in Connecticut, Salinger placed the final line on the final chapter of the book. It is with Salinger’s experience of the Second World War in mind that we should understand Holden Caulfield’s insight at the Central Park carousel, and the parting words of The Catcher in the Rye: “Don’t ever tell anybody anything. If you do, you start missing everybody.” All the dead soldiers.