Where Have You Gone, Horace Clarke? 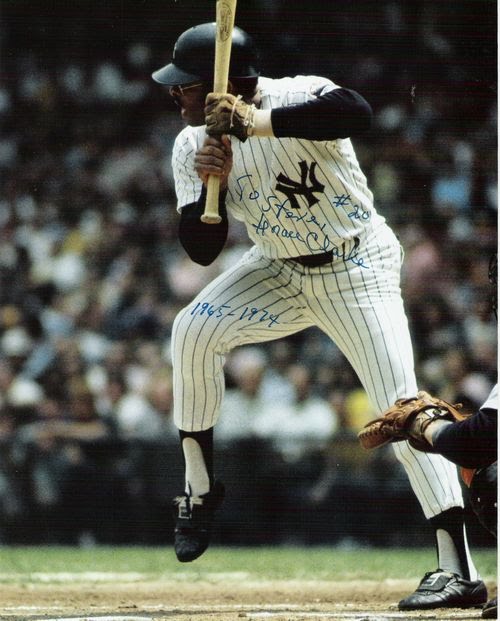 Over man Cliff with a good piece over at SB Nation–The Conscience of a Lapsed Yankee Fan:

My favorite baseball books are about losers, oddballs, and failures, and what draws me back to every new baseball season isn’t whether or not the Yankees are going to win 95 or 100 games (they’ve won fewer than 94 just twice in the last 16 seasons), it’s seeing how the teams on the fringes perform. Is that rebuild working? Will this be the year that talented young team coalesces into a contender? Will that big trade acquisition or free agent signing take his new team to the next level? Can his previous team compensate for his loss? Can that talented but star-crossed team can stay healthy enough to contend? Did that perennial playoff loser miss its window for a championship? With that managerial change have any impact? How will that new stadium play? How ugly will those new uniforms really be? How will the new playoff or scheduling format impact the pennant races?

As for the Yankees, I don’t worry about them, and that’s what worries me. I want my daughter to love baseball, in part because I’ve dedicated part of my life to it and don’t want her to feel shut out of that. Baseball is a novel that unfolds over years, individual teams are puzzles that take years to solve. The Yankees, however, are more of a long-running television procedural. They hit all the same beats and catch phrases, the credits roll, and then they do it all over again. I spent my childhood hoping I’d see the Yankees win the World Series during my lifetime (yes, really). I suspect I’m now going to spend my daughter’s childhood hoping she’ll see them have a losing season. 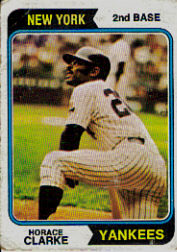 For too long now, we in the media have referred to the Yankees of 1965 to 1974 as representatives of the “Horace Clarke Era.” The team’s starting second baseman for much of that period, Clarke has come to symbolize the mediocrity of those Yankee clubs. Seen here in his final Topps card (vintage 1974), Clarke was viewed as an inadequate player, symptomatic of a team that was inadequately built to win any pennants or division titles during that ten-year span.

The criticism of Clarke has run on several different levels. Too much of a free swinger, he didn’t draw enough walks. He didn’t have great range at second base, especially toward his backhand side. He also didn’t turn the double play well.

To some extent, the criticisms are all true. He never coaxed more than 64 walks in a season and usually finished below the 50-mark. Defensively, he paled in comparison to two other Yankees, predecessor Bobby Richardson and successor Willie Randolph. On double plays, Clarke bailed out early and often. Instead of pivoting at the bag, he sometimes jumped out of the way of runners while holding onto the baseball.

Those critiques provide only a partial view. The switch-hitting Clarke stole bases, bunted adeptly, and usually hit for a respectable average (at least for that era), which would have played acceptably as the eight-hole or ninth-place hitter. The Yankees made the mistake of using Clarke as a leadoff man because he looked and ran like a tablesetter. That was their mistake, not his. In the field, Clarke had his shortcomings, but for a guy who supposedly lacked range, he did lead the American League in assists six times. Part of that might have been attributable to having a sinkerballer like Mel Stottlemyre on the staff, but it’s also an indication that Clarke had pretty good range to his left.

Was Clarke a top-notch player? Of course not. But I would say that he was better than mediocre. (The Yankees of that era, like Clarke, were also better than advertised. Just look at the records of the 1970 and 1974 teams.) I think the Yankees could have won a division with a second baseman like Clarke, if only they had been better at other positions, like third base (prior to Graig Nettles’ arrival) or right field. If you want to find the real reasons why the Yankees so often struggled during those years, you need to look no further than the revolving doors at those slots. The Yankees had substantially weaker players at third base (Cox, Kenney, Sanchez) and right field (Kosco, Swoboda, Callison). It’s just that none of the third basemen or right fielders lasted long enough to become targets of the critics.

Putting aside the issue of talent evaluation for a moment, Clarke was an intriguing player to follow, especially for a young fan like me. Clarke came attached with a cool nickname. He was called “Hoss,” raising memories of Dan Blocker’s iconic character from Bonanza. (Bill White, in particular, loved that nickname. “Hosssss Clarke,” he liked to say with flourish.) Clarke also had an intriguing background. He was one of the few players I can remember who hailed from the Virgin Islands. So that made him a little bit different from your run-of-the-mill player. Then there was Clarke’s appearance. He wore very large glasses, the kind that became so horribly fashionable in the early 1970s, really round and overly noticeable. On the field, Clarke not only wore a helmet at the plate; he sported one while patrolling second base. I haven’t been able to figure out exactly why he did that. It may have had something to do with his fear of being upended on double-play takeout slides. Several years ago, Darren “Repoz” Viola of Baseball Think Factory asked former Yankee broadcaster Bob Gamere why Clarke wore the helmet at second base; Gamere explained that it may have stemmed from a 1969 incident in which Clarke was hit in the head with a ball, but he wasn’t completely certain. Whatever the reason, the helmet made Clarke a distinctive landmark on the middle infield.

For all of those reasons, and for being a quiet guy who rarely complained, Hoss Clarke was a likeable guy. He was also a decent ballplayer. So let’s stop vilifying the man who was once booed during pre-game introductions on Opening Day at the old Yankee Stadium. Let’s stop raking the man that one New York writer repeatedly referred to as “Horrible Horace.” I’d prefer to call him “Helpful Horace.” Let’s go with that instead.