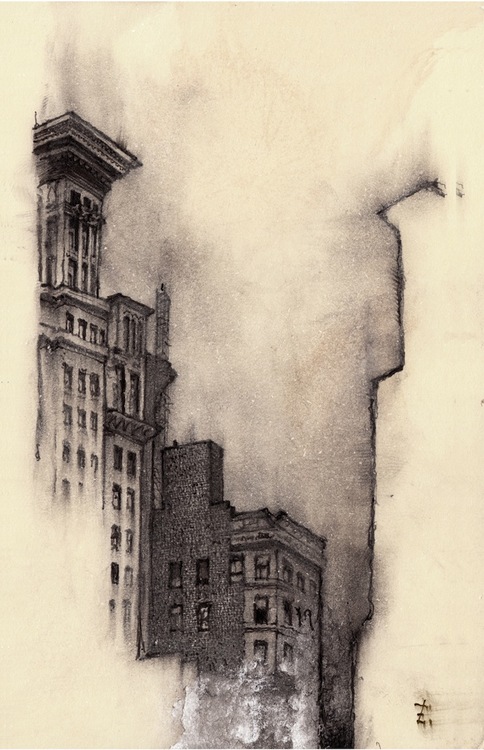 Drawing by Zachary Johnson via This Isn’t Happiness.

The beat goes on.

Wasn’t that bad at all, was it?

Troopin’ to work in the BX.

Win or suck tonight for the Jets. What’ll it be?

The Yanks have re-signed Serge Mitre. We haven’t got a worry in the world! Also, I was struck with a second-guess last night. Cliff Lee has made such a good nemesis for the Yanks the past few years, what if he signs for less and spurns the Bombers? Then, we’ll have something to get all sweaty about.

And How Does That Make You Feel?

I have no idea how Zack Greinke feels about New York City. The word used to be that he did not want to pitch here — because, it was usually implied, all the stress and pressure of New York would be hard on someone dealing with social anxiety disorder and depression, as Greinke famously has. Then came word that someone was saying maybe Greinke actually likes New York after all; followed quickly by word that the Yankees aren’t buying it.

Earlier today, Craig Calcaterra wrote that “our speculation about what Zack Greinke may or may not be able to handle in light of his anxiety disorder is ignorant, silly and in some ways irresponsible,” and “the only ones who know for certain about whether Greinke wants to be in New York and whether his anxiety issues would be triggered by playing there are Zack Greinke and his doctor.” I agree with that, mostly. Practicing amateur psychiatry on someone you’ve never met is rarely an effective practice.

Craig then continues, “To suggest we know better is to suggest that we know the first thing about how anxiety disorder works and how it’s operating in a specific patient. I think I know a lot of stuff, but I don’t believe I know that. Do you?” To which I say, well, yes to the former, though no to the latter. I know extremely little about Greinke, certainly not the specifics of his psychiatric makeup. But I do know quite a bit about depression and anxiety disorder, as both run in my family —  to paraphrase Cary Grant  in Arsenic and Old Lace, they practically gallop.

The idea that New York would be especially bad for someone with Social Anxiety Disorder seems to me completely unfounded. Depression and anxiety are internal matters; they may be triggered to a greater or lesser extent by external factors, but an otherwise healthy person isn’t likely to become clinically depressed because New York features a lot of media attention, while S.A.D. is a disorder precisely because its feelings of anxiety are not reflective of reality. Greinke might find New York stressful or he might not, might like it or not, but it’s unlikely that external factors would determine his mental health. I know plenty of people who deal with anxiety and depression and who find New York much easier to thrive in than their smaller hometowns.

Besides — though this may less true among athletes and sports fans than in the city’s larger culture — few places on earth are more accepting of psychiatry. Not to turn this post into a Woody Allen riff, but our shrink per capita ratio is off the charts, and New Yorkers talk about their therapists about as frequently as they discuss the weather (granted my view is probably a little warped from working in publishing and journalism, where psychotherapy is essentially mandatory).

It’s fun to speculate about Zack Greinke becoming available via trade – really, it’s either that or read more about Derek Jeter’s negotiations, or Brian Cashman’s decision to rappel down a building in an elf costume. (Is anybody else getting a little worried about that guy?). But even aside from the inappropriateness and inutility of attempting to psychoanalyze Greinke, it seems to me too many people have bought into the idea that New York is inherently stressful, therefore someone with anxiety should not come here. On the contrary. This city accepts anxious migrants from all over the world.

[Picture by Bags and Marianne Rafter]

Dark Harbor, Nathan Ward’s riveting book about the New York Waterfronts, got a good review in the New York Times over the weekend:

For a writer of history, there is always a risk in telling a story that’s been told before. In this case, the bar is especially high, because Ward presents a tale that has been told not just often but quite well, first by Johnson and then in the Oscar-winning movie.

To make his challenge even greater, Ward brings no huge trove of new information to his account, and he offers no novel grand view to reshape our thinking of this chapter in American history. But he does have a few weapons at his disposal — namely, meticulous reporting, a keen eye for detail and an elegant writing style — and he uses them to make the tale seem new again.

Check out the book and dig Ward’s blog.

Peace to Jeremiah’s Vanishing New York for hipping me to the photography of Ted Barron. Here’s some of Barron’s work, featured recently over at Sensitive Skin Magazine: