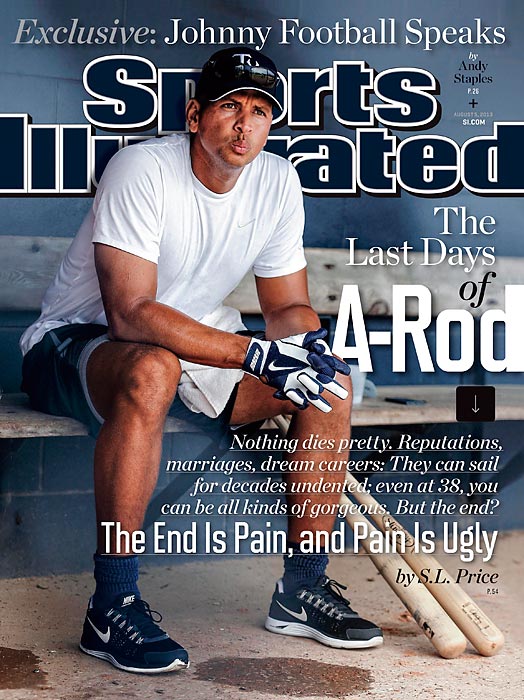 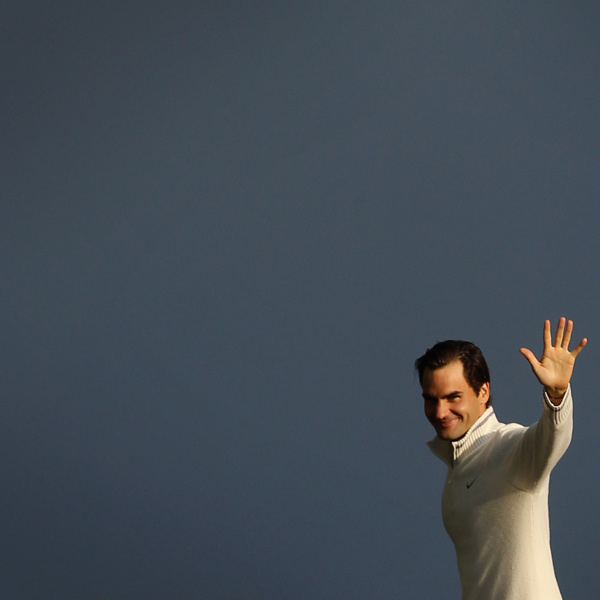 SI‘s Scott Price was with Roger Federer yesterday after Federer won Wimbledon for the seventh time:

Finally he left the broadcast center, and stepped outside into the rain. Centre Court loomed a few hundred feet away. Federer’s sneakers squished on the slick tiles; workers hauling equipment stood aside to stare. This Wimbledon gives him 17 majors in all, six more than his archrival, Nadal: A nice cushion in the great race the two run but rarely admit. On Sunday, Federer just might have put the greatest-of-all-time title out of reach for good.

“Do I care?” he said. “I guess I do, because I’d be lying if told you I don’t care at all. But for me it’s the same thing as the Novak loss and trying to beat him. Rafa has an amazing career, we have two such separate lives and worlds and things we do and the way we do them. He’ll always be a legend and a great champion, so for me if he does beat my record it almost doesn’t matter. Because I did things he can never do. He did things that I can never do. It’s the moments that live and the memories that are with me that are most important.”

Still, he was asked, it’s nice to widen the gap? 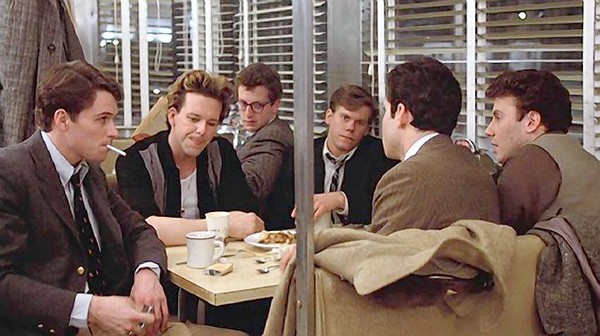 Over at Vanity Fair, Scott Price has a long piece on “Diner”:

The second crisis hit when an on-set fire cost another night of shooting, and MGM refused to budget another day. Levinson needed more time. Sova suggested breaking out a second camera in the diner, to speed things up by filming actors on both sides of the table simultaneously. That, however, created a problem with sound: instead of clipping a lavalier microphone to just one actor and allowing him to say his lines cleanly—that is, without overlap from other actors, so it can be edited into a scene later—the new situation demanded that all the actors, on-camera and off, be miked. Robert Altman aside, at the time it was still rare to use overlapping dialogue, especially for trivial, tabletop chatter. “What Levinson did in a revolutionary way 30 years ago,” John Hamburg says, “is something we’re doing now.”

It was, for the final two weeks, a kind of liberation. “Because we didn’t have to worry about overlaps, we could really ad-lib,” Guttenberg says. “You could ad-lib offstage and throw the guy a fastball, and he could catch it and throw it high. That’s what made the experience so unique in filmmaking: you didn’t have to match ‘what we did last time.’ It was ‘Just give me something extraordinary. Take it wherever you want to go.’ ”

…Banter is a delicate thing, crippled by obvious effort, destroyed when, as so often happens on sitcoms, it’s reduced to point scoring or put-downs. Reiser was so quick, so on, that there are moments in Diner when he sounds as if he’s trying out material. But Levinson was also going for something deeper, a casualness implying dynamics and affections that reach back years, and even the screw-ups nail that quality. The best comes when Guttenberg’s Eddie asks Boogie, “Sinatra or Mathis?,” and Rourke brushes him back with “Presley.” “Elvis Presley?,” Guttenberg’s Eddie says. “You’re sick … ” He starts to improvise, but it’s like watching a kid let go of the handlebars for the first time: he knows he’s going to crash. “You’ve gone like two steps below … ,” Guttenberg stammers, “in my … my, uh, book.” Clearly, a blown take: The actors giggle, Stern spits up his drink, breaks character, and says, “Once again … ” But rather than splice in a cleaner run, Levinson went with the mess.

For more, check out this Q&A I found in an old issue of American Film: My Dinner with Barry (Robert Ward)

And yeah, that’s the same Robert Ward who wrote the famous “Straw that stirs the drink” Reggie profile for Sport.

Hustlers: The Politics of Glory

Big weekend for college hoops, so here are two related pieces for you:

Calipari’s detractors delight in noting that he has always left town one step ahead of the sheriff, even if he was cleared by the NCAA of any personal culpability in the UMass and Memphis messes. And what do the message-board cynics make of his $1 million donation last June to Streets Ministries of Memphis, or his washing of poor kids’ feet in Port-au-Prince and Detroit last year, or his organizing a January 2010 telethon that raised $1.3 million for Haiti’s earthquake victims? They cite ESPN analyst Bob Knight, who in December 2009 called Calipari the embodiment of the sport’s ills. “Integrity is really lacking [in college basketball],” Knight said in a speech in Indianapolis. “We’ve got a coach at Kentucky who put two schools on probation, and he’s still coaching. I really don’t understand that.”

Never mind that the General, no pillar of rectitude himself, had his facts wrong: Only Memphis went on probation. Knight is the bulldog eyeing the cat as it lands, again, on its feet, and he’s not the only one perplexed. Calipari once declared that rather than competition or education, “everything in this game is marketing,” and it’s a constant struggle for rivals and the hoops commentariat to decide where his sell begins and ends. “John’s out there,” says Larry Brown, one of his coaching mentors. “The way he dresses, the way he talks nonstop. A lot of people look at that shtick and say, That guy is not real.”

And Michael Sokolove’s story on Perry Jones for the Sunday Magazine:

Even while he was still at Duncanville High School in suburban Dallas, the Web sites that track such things had already projected Jones as a lottery pick — one of the first 14 players selected — in the 2011 N.B.A. draft. A couple of the more authoritative ones predicted that he could be the No. 1 pick in the entire draft — the best player available from the college ranks and from the ever-deeper pools of international basketball talent. “Devastating first step . . . ability to beat most big men off the dribble with ease,” is how the Web site DraftExpress described him in a recent evaluation. “Potential superstar,” the Hoop Doctors said, speculating that he could be “the next Tracy McGrady.” HoopsHype said that the “upside he possesses is unparalleled at the college level.” The respected ESPN.com analyst Chad Ford has had him at or near the top of his mock draft from the start of the season.

The paradoxical thing, though, about Jones’s status is that he was never a truly great high-school player, certainly not a dominant one or one who scored a lot of points. But just about everyone assumes that he will be a one-and-done player at Baylor, a pure rental who stays for a single season. That has become the norm for top college players. In fact, in some projections, as many as six of the top 10 picks in this spring’s N.B.A. draft are college freshmen. The trend has changed the college game: teams with top talent do not stay together long enough to cohere, sometimes leaving opportunities for less-talented but more-experienced teams, like Butler last season and George Mason in 2006, to advance to the Final Four. And it has changed the N.B.A., making it, at times, utterly unwatchable, because the rosters are stocked with too many players who were never fully taught the game and are learning on the job. (Players can no longer enter the N.B.A. straight out of high school, as Kobe Bryant, LeBron James and many others did.)

One last word on football. If you’ve got the time, do yourself a favor and check out Scott Price’s excellent bonus piece on Aliquippa, P.A.