It is always the same, the sudden, stomach-dropping, jolt.  Walking along a city block, looking up at a familiar store front or restaurant, a Closed sign hanging in the door way, or a vacant window. Something has happened. Change has come, like it or not.

I gasped last night as I walked past Sal and Carmine’s pizza shop on Broadway between 101st and 102nd (They make a salty but delicious slice.)  The grate was up and a red rose was taped against the metal.  Above it was a small xeroxed obiturary from a New Jersey paper.

Sal died late last week. I’ve been eating their pizza since I was a kid.  Sal and Carmine.  Two short, taciturn men in their seventies, though they look older. I never knew who was Sal and who was Carmine, just that one was slightly less cranky than the other. These are the kind of men that don’t retire but are retired.

The funeral was yesterday; the shop re-opens today. 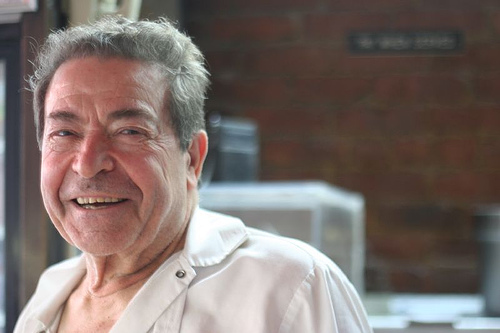 As I read the obituary, people stopped and registered the news.  They congregated for a few moments, some took pictures with their cell phones, and then slowly walked away, the neighbhorhood taking in the loss.