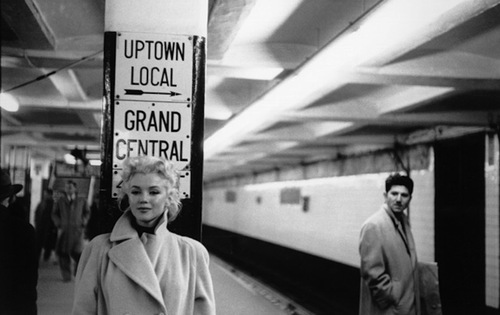 My twin sister loved Marilyn when we were growing up. As much as I loved David Bowie or the Stones or Woody or anyone else I ever loved.

Sam had Marilyn posters on her wall, had Marilyn books, and of course, saw all of her movies, or at least the ones we could find on videotape. I remember going with her to a double feature of Gentleman Prefer Blondes and How to Marry a Millionaire  at the old Regency Theater on 67th Street and Broadway. This must have been in the mid-80s sometime. I pretended not to care about Marilyn or worse, put her down because Sam dug her, but I remember that day, sitting in the balcony watching those two movies and enjoying Marilyn just fine.

Yesterday was the 50th anniversary of Monroe’s death.

When I was sixteen the Regency Theater on the Upper West Side ran a Buster Keaton-Charlie Chaplin-Woody Allen revival for a few months. That was my introduction to Buster and it was love at first sight. I adore Chaplin too but Buster speaks to me in a more direct, personal way.

There’s a wonderful article on Buster by Jana Prikryl in the latest issue of The New York Review of Books. If you are not familiar with Buster, this here is a fine introduction:

More than fifty years have passed since critics rediscovered Buster Keaton and pronounced him the most “modern” silent film clown, a title he hasn’t shaken since. In his own day he was certainly famous but never commanded the wealth or popularity of Charlie Chaplin or Harold Lloyd, and he suffered most when talkies arrived. It may be that later stars like Cary Grant and Paul Newman and Harrison Ford have made us more susceptible to Keaton’s model of offhand stoicism than his own audiences were. Seeking for his ghost is a fruitless business, though; for one thing, film comedy today has swung back toward the sappy, blatant slapstick that Keaton disdained. There’s some “irony” in what Judd Apatow and Adam Sandler do, but it’s irony that clamors to win the identification of the supposedly browbeaten everyman in every audience. Keaton took your average everyman and showed how majestically alone he was.

Very early in his movie career friends asked him why he never smiled on the screen. He didn’t he realzie he didn’t. He had got the dead-pan habit in variety; on the screen he had merely been so hard at work it had never occured to him there was anything to smile about. Now he tried it just once and never again. He was by his whole style and nature so much the most “silent” of the silent comedians that even a smile was as deafeningly out of key as a yell. In a way his pictures are like a transcendent juggling act in which it seems that the whole universe is in exquisite flying motion and the one point of repose is the juggler’s effortless, uninterested face.

Starting tonight, the Film Forum is hosting The Best of Buster Keaton. They will be showing a Buster movie, along with a couple of two-reelers, every Monday for the rest of the summer. Tonight gives Buster’s first feature  for MGM–and arguably, his last good movie: “The Cameraman.” It’s worth seeing on the big screen for  many reasons (the pool scene), not the least of which is this gorgeous sequence filmed at the original Yankee Stadium.

I thought of the old New Yorker theater the other day because it is where my brother and I saw “Tron.” Our old man dropped us off outside the theater and we asked some grown ups to get us in. Later, I saw “The Rocky Horror Picture Show” there. This was well past the theater’s prime, but I am fortunate enough to remember a bunch of the old movie theaters on the Upper West Side.

My favorite was The Regency which showed double features of old Hollywood movies. I’ll never forget seeing Harry Langdon’s “The Strong Man” (directed by Frank Capra). My bro did a spot-on imitation of Langdon by the time we got home.

I also remember the Metro and the Cinema Village and the Thalia, and downtown there was St. Marks 80. What were some of your favorite spots?

Double Features. Remember them? They’ve practically disappeared from the cultural landscape, just like double-headers. I used to go see double features at the old Regency Theater which was on 67th street and Broadway. It was a revival house that played old Hollywood movies. Had a balcony and everything.

When I was 12, I visited my mother’s family in Belgium for the summer. My uncle and his girlfriend took me to the seaside for a few days and I’ll never forget seeing the movie posters for Mad Max II (which was renamed The Road Warrior over here). Raiders was out too but Mad Max II looked like something different altogether, something menacing and sinister.

I eventually saw both Mad Max and The Road Warrior many times on videotape and then on cable. Both movies still scare the bejesus out of me in that way you get scared as a kid, ‘specially if I see them late at night. They are corny in a fantastic way but also filmed in such a tense and seemingly credible manner that I get the willies every time.