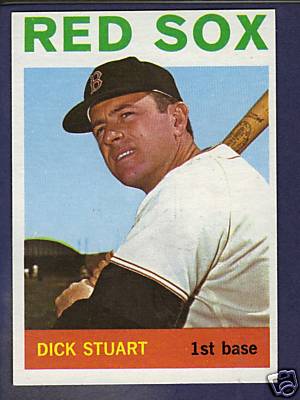 Quick now, how many current Yankees have nicknames? “A-Rod” for Alex Rodriguez and “Tex” for Mark Teixeira don’t count; those simply involve the shortening of last names for the sake of convenience. In terms of legitimate nicknames, Hideki Matsui has been known as “Godzilla” going back to his days in Japan. Chien-Ming Wang used to be called “Tiger” in the minor leagues, but the moniker has never caught on in the big leagues. Then there’s Alfredo Aceves, who is known as “Ace,” and Melky Cabrera, sometimes called the “Melkman,” but they’re not exactly the most creative of nicknames. And that’s about it.

The Yankees are pretty typical in this regard these days. Nicknaming has become a lost art in the contemporary game, partly for reasons of political correctness and partly because we’ve just become damn lazy. At one time, nicknames were a huge part of the game’s subculture, largely because of the influence of headline and beat writers at newspapers and local team broadcasters. The 1960s represented one of the golden eras for nicknames. It is in that decade that we find one of the most creative and fitting nicknames of all time, even if it did have to belong to a Red Sox first baseman.

By the summer of 1964, Dick Stuart had firmly established a reputation as one of the worst defensive players in the major leagues. Although he was the starting first baseman for the Sox, Stuart couldn’t do anything well with the glove. (That’s probably why Topps showed him with a bat in his 1964 card.) With hands of gypsum, dime-like range, and generally poor instincts, Stuart achieved the Triple Crown of fielding ineptitude. By most accounts, he was also indifferent to the defensive game, so he never motivated himself to improve. Now I never actually saw Stuart play, but I’ve heard so many stories of his lack of defensive prowess that some of them have to be true.

With such anecdotal and statistical evidence (he reached double figures in errors eight times), it’s safe to say that Stuart was historically bad when it came to the business of guarding first base. So it was quite appropriate that in 1964 one of his teammates fitted him with the nickname of “Dr. Strangeglove.” The creation of such a name relied heavily on Hollywood; the Peter Sellers black comedy, Dr. Strangelove: Or How I Learned To Stop Worrying and Love the Bomb, had just been released in theaters on January 29. By placing the letter “g” between the “e” and the “l” in Strangelove, the unknown Red Sox teammate had devised a pithy play on words while tapping the popular culture of the day. The timing could not have been better, considering that Stuart had made 29 errors the previous season, a simply remarkable achievement for someone playing first base.

Stuart’s haphazard fielding had nothing to do with the movie’s plot, in which an insane general tries to initiate nuclear holocaust while politicians do their best—ineptly, I might add—to save the world. The supremely talented Sellers played three roles in the film, including the title role of “Dr. Strangelove,” an important scientist in Nazi Germany. Stuart was similarly schizophrenic to the versatile Sellers; as poor a fielder as Stuart was, he was often a feared slugger, once hitting a career-high 42 bombs for the Red Sox.

Not surprisingly, the creative moniker of Dr. Strangeglove took hold quickly and never let up, becoming almost mandatory whenever Stuart’s real name was uttered. When another 1964 film, Goldfinger, achieved a level of mass popularity, a few folks tried to attach the nickname “Stonefingers” to Stuart, but that label never really caught on.

All in all, Stonefingers is pretty good, but Dr. Strangeglove is just great. Is it the best nickname of all time? I’ll leave that up to you, the reader, to decide.

And maybe Godzilla should be renamed the Salamander or the Chemeleon or some other lizard-themed diminutive after what we've seen this year.

Any guesses on what the roster move for Hinske will be? Pena, I guess, unless they're planning to DL somebody. Do they need to make a move to add him to the 40-man?

I've always been partial to "the Mad Hungarian" as the best baseball nickname of all-time, but "Dr Strangeglove" has got to be in the top 10.

The guys at RAB call Aceves "the Mexican Gangster", though I have no idea why. That's a pretty good one for these days.

"Frankie Brains", while also just a variation on a name, is pretty cool too, for the modern day.

I always thought Dr. K was the coolest nickname. Maybe just having Dr. as part of the monicker is enough?

to me el duque has the best nickname of recent yankees

[5] Believe it or not, two man shared that nickname.

Of the modern guys, I think Big Unit, Pronk, Kung Fu Panda and Fat Elvis are among the best.

Also, Melky is also called "Leche", which is kind of cool.

it wasn't a "baseball" nickname, but the sobriquet William Hayward Wilson's grandma bestowed on him, pretty much rules:

I've always been a big fan of Matsui, but if your nickname is Godzilla, you better do more damage than .246/10/28 in 203 ABs. As usual, the Yanks have kept the aging slugger around when I'm sure you could get Austin Jackson, for example, to hit that -- or at least get the experience you need to figure out whether he'll ever exceed that. Anyway, the nickname no longer fits is all I'm saying. But also, nothing would please me more than to have him return to true Godzilla form.

i'd like Cano/Posada flipped, but this is a nice lineup. i'm glad we don't face King Felix in this series...

Children, children. Baseball was not created in 1945; your sadly attenuated institutional memory is showing. The Dr. Strangeglove cultural reference is just a fading memory.
So how about: Charlie (King Kong) Keller--a swarthy, hulking man with a sweet temperament. Or George (Twinkletoes) Selkirk--he ran on his toes. Or Tommy (Ol' Reliable) Henrich--for his clutch hitting. Or, as an illustration of the casual bigotry of the time, Poosh 'Em Up Tony Lazerri. Or Irish Bob Meusel. And anyone who wore glasses was Specs--as in Torporcer. But, of course, one can't improve on the Bambino or Joltin' Joe.
Dr. Strangeglove? Close but no cigar..

[0] I'm just intrigued by the notion that a seemingly one dimensional player in the days of yore carved out a rather nice MLB career playing first base.

Well.... it terms of 'cool sounding', this doesn't really fit the bill, but when you think of it, and the improbablility that this could be bestowed on a singe player.... just how cool is it to be named:

I mean really. How can it get any cooler?

I also liked that Gooden was often referred to as just 'Doc'.
As in: the Doctor is in the house?

Kung Fu Panda is just all kinds of awesome. I hope that kid gets to the All-Star Game.

well, you get the idea. baseball nicknames are a bit of fascination with me. i have my own names for most modern players - if i don't, then it's up to chris berman, and nobody wants that.

[15} Sorry OE, but Irish Muesel and Bob Muesel were two different players. Irish's real name was Emil and a look at B-R tells me that Bob was known as Long Bob.

don't be sorry, more people should learn of He Who Was Named Biscuit Pants

How about my personal favorite:

If you really want to go back a way:

My favorite player's nickname is "Snuffy Stirnweiss." Yes, he was a Yankee.

My next favorite is "Poosh 'Em Up Tony" Lazzeri...

How about William Ellsworth Hoy (1862-1961) who was deaf and was known as "Dummy" Hoy? No one ever said baseball players are nice.

By the way, in "Ball Four" Jim Bouton told a couple of Dr. Strangeglove stories. One of them had to do with Stuart being late for a team meeting and walking through the room like a model saying, "Dick Stuart is wearing a suit by [such and such designer]" or something like that.

and of course the greatest of all time.."Mr. October"!