Observations From Cooperstown: A Tribute to Don Mincher 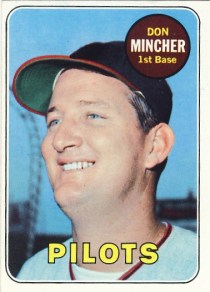 I usually write exclusively about the Yankees, either past or present, in this space. That’s because many of the readers have told me they prefer to read about the Yankees in “Observations From Cooperstown” and “Card Corner.” But there are times when I find it necessary to deviate from that plan. The loss of former major league slugger Don Mincher is one of those times.

Don died a week ago at the age of 73, just about six months after retiring as president of the Southern League. Though I never met him face to face and only remember his playing career from a few highlights, he meant a lot to me personally. Don was the first player I interviewed for the first book I wrote: A Baseball Dynasty: Charlie Finley’s Swingin’ A’s.

I had never done an interview for a book-length project, so I really had no idea what I was doing. If the phone interview had gone poorly, I might have felt discouraged to do any more. But Don Mincher wouldn’t let that happen. He was friendly, accommodating, informative, helpful, and funny. At the end of our extended conversation, he gave me some helpful hints. He told me which A’s to avoid interviewing, and even warned me about one guy who would likely ask me for money in exchange for the interview.

The interview with Mincher went so well that I said to myself, “I can do this.” I interviewed several other players on the way to putting together a book over which I take a certain amount of pride and a great deal of pleasure.

Don provided me with some real insights into the inner workings of the A’s in 1971-72. When Mincher heard that t he fiery Dick Williams would replace the laid-back McNamara, he knew that the culture on the ballclub would change dramatically. “Well, I knew one thing right away; there would be some confrontations. I knew that,” Mincher told me back in 1997. “I knew Dick Williams from playing against him, his reputation and what-have-you. And I knew there would be some confrontations that would take place, and I knew that Dick Williams would win ‘em all.”

Mincher realized that a constant swirl of turmoil would result from the heated interaction between the feisty Williams and some of the egocentric players on the A’s. “You could just feel it coming,” Mincher said, “and sure enough there was.” More importantly, Mincher sensed that with the hiring of Williams, the A’s were about to start winning a lot more games than they done in the late 1960s. “That was really the beginning of a great ballclub,” Mincher said declaratively, “when Dick Williams was signed to that contract.”

In addition to the heavy demands imposed by Williams, the 1972 season also marked the beginning of an era of ill feelings between some of the Oakland players. “I can remember a lot of animosity in that clubhouse between individual guys, and it became a little bit cliquish to some degree at that time,” said Mincher, one of the few A’s who didn’t have conflicts with his teammates. “It was amazing the guys that had trouble with each other just forgot about it when they went out on the field, and then picked it up after the game. It was amazing to do that.”

Mincher would be long retired by the time player and owner controversies fully overtook the team in 1973 and ’74. But the roots of dissent all go back to 1972.“Yeah, I can remember it beginning in ’72. Of course, I wasn’t there when it really got hectic, but I can imagine what happened, and I can imagine who was in the middle of it. It wasn’t any fistfights or brawls or anything like that [in ’72], but I remember the bickering, sure.”

The catalyst to much of the controversy could be found in the form of a future Yankee. “Reggie [Jackson], who is probably the most intelligent individual I ever played with,” Mincher recalled, “was always the center of the media attention, either good or bad. And he seemed to always be there. I can remember some bickering with other players and him. You know, Dave Duncan, who was Reggie’s good friend—they had some problems. But David was a very stern individual himself, just like he is now, really demanding a lot of the pitching staff and himself. When an outfielder caused a pitcher to get in trouble with an overthrow or an error or something like that, there could be some things said and some words exchanged in those situations. And I can remember some of those. Of course, my old roomy, Sal Bando, he wasn’t very shy about stepping up to the plate either as far as telling people exactly what he thought. And there would be some words back and forth.”

At times, the wars of words forced a likable, even-tempered player like Mincher to assume the role of peacemaker. “I did,” said Mincher, who usually preferred to stay in the background. “Of course, when you’re not playing regularly and you’re just doing your thing, you try to get along with the players, and just sit down and be quiet… I tried to do my part and console everybody. But really, with those kinds of mentalities, egos, and talent, they worked themselves out.”

Mincher said that the uncomfortable feelings created by such verbal outbursts never seemed to interfere with the team’s on-field playing ability. “These guys were great, great players, and they learned from most things, and while I was there we never had any fistfights or anything like that. And all of the confrontations [actually] led to good things, and they just played better, it seemed like, as they went along.”

Mincher was traded to the Senators in the middle of the 1971 season, but he returned to Oakland in another deal the following season, primarily as a pinch hitter. He achieved his most indelible highlight as a member of the A’s with his appearance in Game Four of the World Series. Called upon as a pinch hitter in the ninth inning with the A’s down a run, Mincher faced Reds relief ace Clay Carroll. With the count one-and-oh, Carroll threw a fastball over the middle of the plate. “I was lucky enough to be able to get a good pitch I could drive, down in the strike zone,” Mincher said, his memory working in overdrive. “I tried to get a ball that you can drive up the middle or pull in the hole to first base. Those were the things I really thought about, and I thought about on that day. The ball went directly over the second baseman’s head. If it had been on the ground, it’d been a double play.”

But it wasn’t. Mincher’s uppercut swing enabled him to lift the ball over the infield. “I remember it just like it was yesterday,” Mincher told me in 1997. “I got it in the right-center field gap, which probably should have been for a double, but I was cold and couldn’t run.” Mincher’s golf shot into the alley scored pinch-runner Allan Lewis with the tying run and sent Gene Tenace, representing the potential game-winning run, to third base.

“It’s the last hit I ever got,” Mincher said in recalling the key RBI single that tied the game and set the table for Angel Mangual’s game-winning single, “and certainly it’s the most vivid in my memory.” Mincher’s pinch-hit RBI helped the A’s win Game Five of the Reds, on their way to a stunning upset in the 1972 World Series. It was also marked the final at-bat of Mincher’s career; he retired after the season, rejecting an overture from Finley to become the team’s first DH in 1973.

Mincher’s career ended with Oakland, but there was much that transpired in his other major league stops. Drafted and signed by the original Washington Senators, he then moved with the franchise when it became the Minnesota Twins. As the starting first baseman, he played an important on the 1965 American League pennant winners, hitting a home run against Don Drysdale in a seven-game World Series loss to the Dodgers.

From there he went to the California Angels, where he put up a productive season before ending up on the receiving end of a Sam McDowell fastball early in 1968. The ball struck him squarely in the face; Mincher slumped to the ground, his face bleeding. Limited to 120 games and plagued by dizzy spells throughout the summer, Mincher muddled through one of his worst seasons. Concerned that Mincher might never be able to return to form, the Angels left him unprotected in the expansion draft. That’s how he ended up with the Seattle Pilots in 1969. He had a good year for a bad team, while becoming the only All-Star representative in the franchise’s one-year existence.

The Pilots moved to Milwaukee, but Mincher never made the trip. He was traded to Oakland for a package of catcher Phil Roof, outfielder Mike Hershberger and pitchers Lew Krausse and Ken Sanders. He then moved on as part of a trade package to Washington for Mike Epstein and Darold Knowles, moved with the Senators franchise to Texas, and then made his last pitstop in Oakland. By the time he called it a career, he had hit exactly 200 home runs, put up an OPS of better than .800 seven times, and accumulated nearly as many walks as strikeouts. He was a hitter with power and smarts, and there is always value in that kind of player.

Yet, Mincher’s story did not end there. Remaining in baseball, he made a smooth transition to the front office, eventually becoming the GM and then the owner of the Double-A Huntsville Stars. (It was while he was owner that I interviewed him for the book on the A’s, and began to understand why he was beloved in the Huntsville community.) From there, he was promoted to president of the Southern League. Along the way, he became a revered figure in Huntsville, the unofficial “Mr. Baseball” of the community. They loved him for his work ethic, his easy going personality, his willingness to talk to just about anybody.

I interviewed Don only once, but I miss him. I can only imagine how much the people of Huntsville, who knew Don Mincher very well, are missing him today.

Great job. Thanks for this, Bruce.

[2] seriously. i *always* learn so much baseball history from you, bruce. thanks much!

Don Mincher spoke to a club I'm in (The Triple Play Baseball Club) a few years back and I remember him as being something of a visionary about how to increase attendance at Southern League games. Basically he said that he wanted everyone working (from the parking guys, to the ticket sellers to the ushers) to be friendly to the fans, which doesn't sound like such a remarkable thought except that no one was doing it. Also, he said that if the women's rooms weren't spotless that Momma wasn't going to come back; and if Momma wasn't coming back the family wasn't coming back.

He and his wife also had some very nice things to say about Jim Bouton. Don Mincher was all class.

EE, good to hear that about Mincher. Confirms what I have heard about him.

With regard to drawing more fans, sometimes the best suggestions are the simple ones. Being nice to your fans works.

BTW Mincher had a 127 OPS+ with 200 homers -- identical on both counts to Oscar Gamble.