Observations From Cooperstown: Dom Valentino and a Look Back at 1987

It’s tempting to say that Phil Rizzuto, Bill White and Frank Messer were the only broadcasters for the Yankees during the 1970s. It seemed that way, if only because those three men were fixtures on television and radio. But there were a few others who announced for the team that decade, including Fran Healy,  a good guy who made the immediate transition from backup catcher to broadcaster, and Bob Gamere, who is now in a federal prison for possessing and transporting child pornography.

There was also a guy named Dom Valentino.

Valentino died last week at the age of 83. If you don’t remember him as a Yankee broadcaster, you’re easily forgiven. I have only vague recollections of Valentino, and I was a diehard Yankee fan for most of that decade. Valentino announced Yankee games for just one season, in 1975, which turned out to be an also-ran campaign for the Yankees, just one year before their celebrated return to the World Series.

But I do remember Valentino, at least a little bit. Further research reveals that he was all of five feet and four inches, but had a large, booming voice that belied his stature. A colorful personality who wore shirts with wide collars that could have fit aircraft carriers, Valentino had an excitability on the air that made him distinctive. He sometimes embellished details on the field, trying to make circumstances more dramatic than they were, but hey, baseball is entertainment and not precision brain surgery.

The 1975 season was hardly a hallmark campaign for the Yankees, but it was noteworthy for the debuts of both Jim “Catfish” Hunter and Bobby Bonds in Yankee pinstripes. And it was absolutely tumultuous for Valentino, perhaps the most dramatic year in his life. Not only did Valentino do Yankee radio broadcasts that summer, but he also performed play-by-play for the New York Nets, who still had Julius Erving and were still in the ABA, and the NHL’s New York Islanders. It was a hectic time for Valentino, especially in the spring, when the Yankees, Nets and Islanders were all playing simultaneously. Given such a breakneck schedule, it became understandable why Valentino endured a heart attack in July. Then, during his time in the hospital, Valentino suffered a second heart attack. Two heart attacks meant an end to his one season of broadcasting in the Bronx.

Valentino’s life had almost ended a month earlier, and through circumstances under which he had no control. After a Yankee home game on June 13–Friday the 13th as a matter of fact–Valentino was driving home when he was hit head-on by a drunk driver. The collision thrust Valentino partly through his windshield. Miraculously, he survived the terrifying accident, only to endure the two heart attacks later in the summer. No one should have to go through that kind of a year.

After a 15-month layoff, Valentino returned to broadcasting, but not at the major league level. Determined to announce games once again, He took a job announcing New Orleans Pelicans minor league games. By 1980, he was back in the big leagues, doing play-by-play for the Oakland A’s. Valentino’s friendship with Billy Martin, who was guiding the “Billy Ball” A’s at the time, helped him land the job. Finally, a good break had come Valentino’s way, after all those near tragedies of 1975.

That Valentino somehow made it through 1975, and then fought his way back to a major league broadcast booth, is remarkable. He managed to live until his early eighties, when a pair of strokes and prostrate cancer finally took his life. That’s fighting. And that’s surviving. Dom Valentino, God bless you… 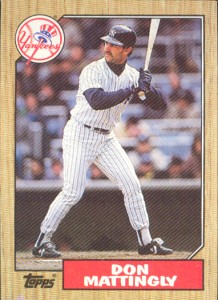 Saturday afternoon’s miraculous comeback from a 9-0 deficit will likely become a Yankee classic, and for good reason (it happened against their hated rivals and occurred on national TV), but it’s not the first time that the Bombers have come back from such a margin against the Beantowners. On June 26, 1987, the Yankees played the Red Sox in a Friday night game at the Stadium. They fell behind the defending American League champions, 9-0, after the first two innings.

In the bottom of the third, the Yankees then went to work against a young Roger Clemens By the end of the inning, the Yankees had knocked “The Rocket” from the game, banged out nine hits against a trio of Red Sox pitchers, taken advantage of an error and a passed ball, and scored a bushel of 11 runs. The big blows came from Dave Winfield (a three-run homer), Gary Ward (a bases-loaded single), and of all people, Wayne Tolleson (another bases-loaded single).

But the Yankees could not maintain their sudden prosperity. Rich Bordi, called on to pitch long relief after a failed start by Tommy John, immediately gave up two runs in the top of the fourth, as the Sox tied the game. The two teams would not score again until the bottom of the 10th, when Mike Pagliarulo drew a leadoff walk against Calvin Schiraldi, moved to second on Rick Cerone’s sacrifice bunt, and came home with the game-winning run on Tolleson’s RBI single.

Not surprisingly, Don Mattingly put himself right in the middle of the offensive heroics. He went 4-for-6, scored two runs, and drove in another. Willie Randolph added three hits and a walk, while Winfield chipped in with his three-run shot, the Yankees’ only home run of the night.

The offensive outburst overshadowed the good work of the Yankee bullpen. After Bordi coughed up the lead, Cecilio Guante gave Lou Piniella three and a third innings of scoreless relief, lefty Pat Clements pitched shutout ball for two and two-thirds, and Tim “Big Foot” Stoddard picked up the win by notching the final out in the top of the 10th. For those three pitchers, the game might have represented the highlight of their brief Yankee careers.

And just to give you a little flavor of the era, some of the other Yankees who played that day included a veteran Claudell Washington, platoon specialist Mike Easler, and the good-hit, no-field catcher, Mark Salas.

Yes, that was 25 years ago. A different time and an era. But the same result–an incredible come-from-behind win against the Sox.

Cool article Bruce. I don't remember Dom, but I do remember Bob Gamere, a truly terrible announcer. Fortunately, he only lasted a year, replaced by Bill White.

My best friend in 1970 was a diehard Mets fan, so we had a running dialog on who had the worst announcers. At the time, the Mets had a guy named Bob Murphy, who made our bad announcers HOF when he called a fly ball as such:

Gamere was bad, but couldn't top that.

A truly great Yankees broadcast team I hear little about:
Phil Rizzuto, Jerry Coleman and Joe Garagiola.
A more entertaining crew may not ever exist.

Murph's brother, Jack was a longtime writer in San Diego. Even named the Stadium after him. Also, Jack once wrote a great, long profile of Archie Moore for The New Yorker called "The Mongoose."

I never had the pleasure of hearing Gamere. What made him such a bad broadcaster?