Blinded With Science (Poetry in Motion) 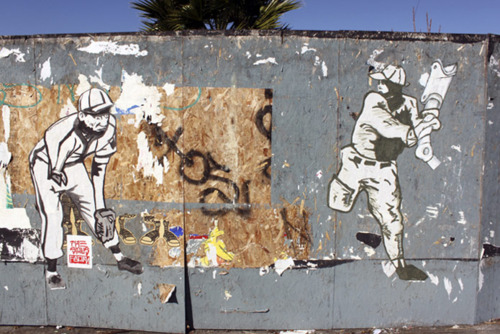 Over at Verb Plow, Glenn Stout has a thoughtful take on the Art vs. Science approach to appreciating baseball:

There is a war in baseball that rarely comes up on the field of play yet rages in the stands, the press box, in print and online 365 days a year.

Neither side speaks much to the other, and when they do those discussions usually degenerate into a series of playground taunts between straw men, Science eschewing the Art crowd as ignorant louts and esthetes blind to logic, and Art denigrating the practitioners of Science as socially stunted denizens of their parent’s basements.

I delicately wandered into this battle a few weeks ago when, in responding to a Facebook discussion Charlie Pierce was involved in on the merits of Mike Cameron versus Dwight Evans I quipped that “Baseball is an art not a science.” Moments later the esteemed Joe Posnanski and a few others gently reprimanded me, one wagging his finger and writing “They don’t keep score at the ballet, Glenn.” Of course I realized the question was not as simple as either comment decreed, so rather than throw dirt bombs back and forth over the back fence I decided to step back, analyze the structure of the disagreement and try to determine if that tells us anything about the veracity of either approach.

Even science is an artform.

Baseball is somethign like an art(in)form(ed). It's also a game!

Oh fer criminy's sake, it's both.

Baseball is a story that happens in flesh and blood and random gusts of wind and pebble-bounces in the infield dirt and how much glycogen is left in a pitcher's leg muscles with two on and two out in the seventh.

And numbers help us record that story, contextualize it, and have conversations about it.

Ted Williams wasn't .406. He was an insanely good hitter.

It's both. Art and science. That's the whole answer. Everything else is just chest-thumping.

It's both, that's right. For some fans it becomes more about one than the other. And that's okay too. Says more about the fan. Movies and books are an art but some people like to rank them, make top-ten lists, pick "the best," give out awards. That is inherently crazy on one level. On another, it just seems like fun.

What we're talking about is baseball through the eyes of the voyeur. That's why Glenn's thinking gets turned on its head when he starts playing again.

I'm with Alex in that calling it an art or a science says more about the person doing the calling than it does about the game. But I disagree that it's both. It's pretty clearly neither of those things in itself. It only becomes art or science for the outsider.

I'll confess that I had fallen in with the science crowd a little too much on this particular debate. Then, something changed. After nearly 20 years of absence, I put the cleats back on and played on not one but two baseball leagues - one that was a little competitive and one that was mostly social. My biggest takeouts from it are not revelatory, but balancing. First, the frequency of play whilst carrying niggling injuries makes it hard to heal (admittedly I am nowhere near the shape of most MLBers, esp since Rich Garces left the bigs), and this has a major impact on the energy required to play. And speaking of energy, the biggest requirement and challenge of playing ball (warning, cliche coming) is staying mentally alert, esp in the field. It's easy to get lost in your head out there. Last big takeout - can't emphasise enough the importance of camaraderie (you listening, B Valentine?), seasons are long, and players make A LOT of mistakes - dealing with them, supporting the teammate and moving on is the team's job - good teams do this instinctively.

Now, I realise that MLB is about 50 levels above what I experienced (btw, I HIGHLY recommend joining a league, and dont take softball as a substitute, it's gotta be hardball!), but it was great and I'll do it again. Why? because it's a great game, best I've found on this planet (and I live in Australia, home of aussie rules footy, rugby codes and cricket) and a helluva lot of fun to play. And I suppose that's where I come down on the art/science debate (cue Crash Davis), it's meant to be fun, damnit! Triple slash lines are just the new box score and ISO and Babip the new RBIs and SLG. No big deal. Don't know about you - as a kid I loved pouring over the box score at the breakfast table and then going out and playing....and I still do. Do yourself a favor and PLAY BALL.