In the second inning of today’s ballgame the Mets’ law firm of Hairston, Rottino,Quintanilla, Nickeas, and Valdespin–you forgot a Hungadunga–put together three runs against Andy Pettitte.

The bases were loaded when Pettitte struck out Jason Bay and David Wright to avoid disaster.

In the bottom of the inning, Alex Rodriguez walked and Robinson Cano singled to left and then Nick Swisher decided to be clever and show off his baseball acumen. He laid down a bunt going for a hit only it was a lousy bunt and Rodriguez was thrown out at third. Jonathan Niese struck out Andruw Jones and Russell Martin to end the inning.

I stayed mad at Swisher for most of the afternoon as Neise threw a fine game. Pettitte recovered and was terrific as well. He made the defensive play of the game in the sixth when Scott Hairston hit a ground ball up the middle. Pettitte, as if by reflex, stuck his hand out, fielded the ball and threw to first for the out. He had to throw several warm-up pitches to rid himself of the tingling sensation in his paw and then retired the next two batters.

The Yanks took advantage of an error by David Wright in the seventh as Russell Martin hit a two-run homer to make it 3-2. The ball hit off the top of the right field wall–it was line drive–and just above the glove of Hairston. Once it hit the wall it popped in the air. A Yankee fan reached out and snagged it. He was close to leaning over the fence but it was ruled a homer.

Another error, this one to start the eighth, put Derek Jeter on second. He moved to third on a base hit by Curtis Granderson and scored on a ground ball single by Mark Teixeira. Then a little bit o luck blessed the Yankees as Rodriguez ballooned a single to short right field. The ball would have been caught if the infield hadn’t been playing in. And so the Yanks had a 4-3 lead and two men on with nobody out. But they could not plate another run and that proved costly because Raphael Soriano gave up back-to-back doubles to start the bottom of the ninth and with it went the save.

Quintanella hit a ball to shortstop and Jason Nix threw it to Rodriguez at third who tagged Ike Davis for the first out. It was a close play, a gamble for Nix, but one that paid off. Then David Murphy, pinch-hitting, slapped a 3-2 pitch into right field, putting runners on the corners. And that was the end of Soriano’s afternoon.

Boone Logan came in to pitch to Josh Thole and struck him out looking on a slow breaking ball that looked low. Thole was not at all pleased with the call and had a few cherce words on his way back to the dugout. Which left it up to the Hungadunga that we didn’t mentioned earlier, Kirk Nieuwenhuis. The latest Mets pinch hitter got ahead 3-0 then took a fastball for a strike. He slapped the next pitch toward right field. Cano, who moves to his left as smoothly as any second baseman in the league, got to it, reached down and gloved it–not an easy play at all–and tossed to Teixeira for the third out.

Jon Rauch, he of the big shoes and garish neck tattoo, hung a 3-2 slider to Russell Martin who hit a high fly ball to left field. 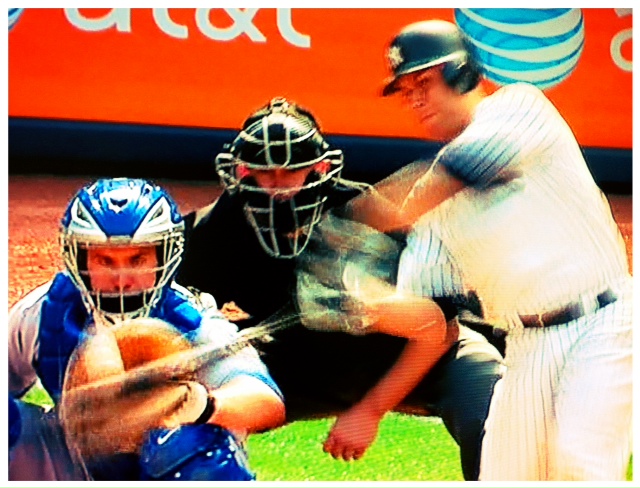 Martin hesitated as he moved out of the batter’s box, and watching on TV, it was hard to tell if he’d gotten under the ball. That went against the initial feeling that he had plenty of it. As they tell you in high school before you take the SATS always trust your first answer. 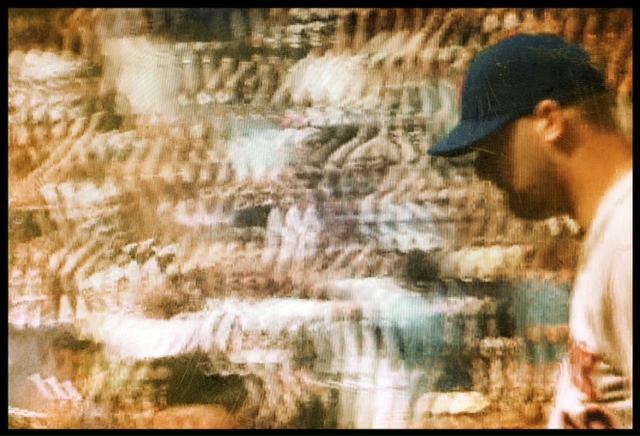 The ball drifted over the fence, the Yanks got the win and a sweep of the Mets. It was the first “walk off” homer the Yanks hit since September 8th, 2010. Martin jumped into the air as he approached the mob surrounding home plate, landed on his right leg and fell to the ground. Thoughts of Kendry Morales and his broken leg flashed through our heads but Martin appeared to be okay as he braced himself against the celebratory slaps and slugs of his teammates.

Bobby V ejected as My Little Foulmouth argues a strike call from T-Clip in the bottom of the ninth.
Man on first, 1-2 count now with two away...

Pedroia strikes out to end the game.

The pitch they argued was outside on the "Amica Pitch Zone" but on the black according to Pitch f/X.

And really tough CHANGE-UP by Clippard to strike Dustin P out to end the Sox game.

Even when Martin wasn't hitting, I still loved him for his defensive abilities. He's now on pace to hit 20-plus home runs, which is pretty nice coming from a catcher who is so strong defensively.

Now it's time for the soapbox. The nonsensical jumping onto home plate to complete a walkoff home run has to stop. Morales missed a season and a half for the Angels, and now Martin practically gets hurt. None of the bases, not to mention home plate, are meant to be jumped on as if the runner were bungee jumping. Enough already. If you have to celebrate the home run, do it by high-fiving, low-fiving, fist-bumping, but enough with the leaps onto home plate! Jeez.

"The bases were loaded when Pettitte struck out Jason Bay and David Wright to avoid disaster."

This is why I wish they'd change the rules in awarding wins. Andy deserves the win for this much more than Logan does.

I always liked the Yankee Clippard

Great write up! I imagine the game thread almost self-combusted when Swisher bunted.

9) There was much unhappiness indeed.

[10] Swisher out to practice walking more than bunting. His OBP is way too low this year.

Although, I shouldn't complain, because run production has been a bright spot for the offense.

It's not like to need more base runners to leave on.

I heard they booed Soriano today. WTF? Nine saves in a row. One slip up. No margin for error.

Who the fuck are these people? Do they get screamed at every time they spill milk or misplace their keys? (BTW, my wife pulls that shit on me, which is why I would never do it to someone else.)

If you win 9 new business pitches in a row, then lose out on the next one, does your boss go ape shit and tear you a new asshole?

I've directed narrators in the studio who get stuck on a line and keep making the same mistake like 5 times in a row. These are real pros, mind you. What's the solution? Laugh about it. "No worries, let's move on and come back to it." Not: You stupid shit, can't even get one line (one hit, one out) right?"

Here are the official rules for booing your home town team.

1. Lots of errors in a game. Genuine sloppy play.
2. Any player who appears not to be making an honest effort, such as not running out a pop up or infield grounder or loafing in the field.
3. Manager takes out a pitcher who is pitching well (binder managing).
4. Manager leaves a struggling pitcher in too long (this gets the derisive cheer, when manager actually makes move)
5. Fielders arguing with an ump during a live play
6. Nick Swisher bunts

That's it. Please post this on the Stadium walls.

If you win 9 new business pitches in a row, then lose out on the next one, does your boss go ape shit and tear you a new asshole?

Well, no, but he doesn't scream and cheer me wildly and wave a sign with my number on it when I land a big deal, either.
Ya takes yer boos cuz ya takes yer hurrahs.

(Not that I'm actually in a "land a big deal" line of work at all; just playing along.)

[14] OK. You made a good point. Maybe the nature of the business is taking the boos (booze?) with cheers. But still, I wishe our fans had a slightly longer leash with guys who are proven performers and have just had a bad day (or in the case of a batter: bad week).

As some one pointed out a few days ago. Granderson struck out 4 times the other day, but was not booed. Not sure how that works.

Any ideas on the formula for booing proven professionals?

(for the record, I have had the negative enforcement style bosses, more than once. "So you won the pitch? Let's see if you can deliver the goods." "You lost? That's why you'll never get that raise.")

[15] I think it's because people really like Granderson, would have a hard time booing a guy like that.