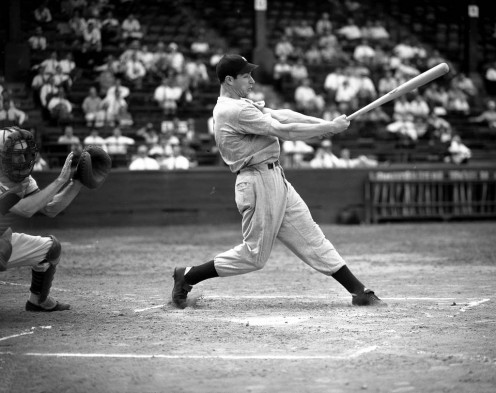 The Yankees won their fourth in a row on this afternoon at Chicago’s Comiskey Park, topping the White Sox by a score of 8-3. DiMaggio was able to extend his streak only through the benefit of a decision by the official scorer. He hit a hard shot at third baseman Dario Lodigiani in the seventh inning. Lodigiani was handcuffed by the ball and couldn’t make a play; the scorer saw it as a hit, and the streak lived another day. Baseball tradition says that no-hitters and perfect games often need a little help from a great defensive play or a questionable call from an umpire, and we don’t have to think back any farther than Johan Santana’s recent no-no for the Mets. This hit by DiMaggio wasn’t as controversial as Carlos Beltran’s foul ball on the chalk, but in today’s culture it might’ve raised a few eyebrows. Oh, well. Twenty-five straight for Joe D.