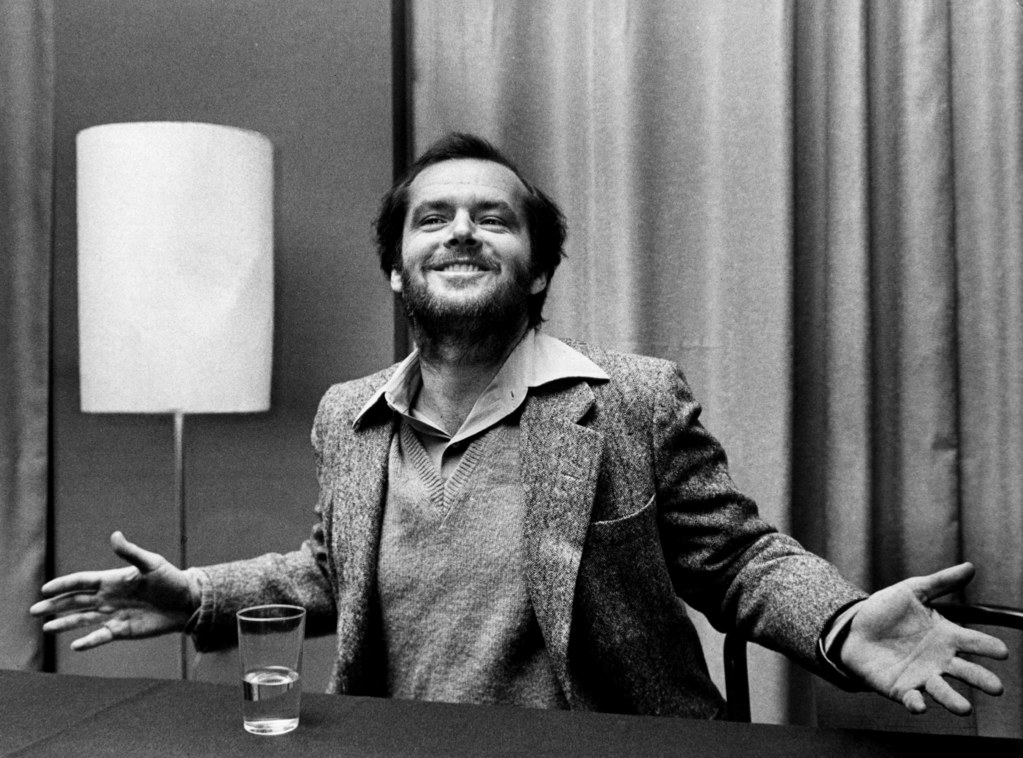 “I believe that Jack is one of the best actors in Hollywood, perhaps on a par with the greatest stars of the past like Spencer Tracy and James Cagney. I should think that he is on almost everyone’s first-choice list for any role which suits him. His work is always interesting, clearly conceived and has the X-factor, magic. Jack is particularly suited for roles which require intelligence. He is an intelligent and literate man, and these are qualities almost impossible to act. In The Shining, you believe he’s a writer, failed or otherwise.” -Stanley Kubrick

I think Kubrick is right. It’s one of the differences between Nicholson and Robert De Niro. I’ve never believed De Niro when he played cerebral guys, like in The Last Tycoon or True Confessions. I always get the sense that when he tries to play brainy guys De Niro is exposed as a mook. But Nicholson, or Robert Duvall, or Gene Hackman, for that matter, can play a certain kind of brainy intelligence convincingly.

I said as much to our pal Matt Blankmon in an e-mail and he replied:

I think DeNiro connects more to Brando and Dean – that emotional physicality. You can buy him as a streetwise guy, a clever guy, but not bookish or cerebral. I don’t know about Duvall as a brainy guy – he’s another guy I feel more as wise, but not intellectual – Tom Hagen, but not Michael Corleone. Nicholson is a guy who just comes across as smart and that’s part of his energy, even when he’s playing a mook like in The Last Detail. The connection to Cagney is apt–Nicholson, however, wouldn’t have been a very good Travis Bickle. I think Paul Newman always projected a certain braininess on screen, so much so that I had trouble buying him as a dumb guy in Pocket Money.

And speaking of The Passenger, what Kubrick is talking about is why you have no problem accepting Jack as a semi-famous world-traveling journalist.

Interestingly – how often has William Hurt played a guy who looks and seems smart, but then is actually kinda dumb? He’s very easy to buy as a scientist in Altered States, but he’s so well suited as the superficially, seemingly brainy guys in Broadcast News and Body Heat who are actually not so smart.

Good points by Matt, especially how all intelligence isn’t the same. And De Niro doesn’t lack intelligence just not the same brand that Nicholson has.

Morgan Freeman. He's the one character in almost every movie who's wisdom transcends mere technical intelligence so much that you feel confident and at ease seeing him even when he or the conditions around him are at their most vulnerable or chaotic.

Man, was he ever good in STREET SMART. Frightening too.

Ha, I'm not sure I like my words in connecting DeNiro to Brando - I know what I mean, but I don't think I expressed it properly. "Emotional physicality?"

I think of Jeff Bridges as a guy who can play both. The newspaper publisher he played in JAGGED EDGE or the president in that movie with Joan Allen or even in TUCKER--and then The Dude.

DeNiro, I'm really not sure what the first word that would come to mind is. Perhaps, "brooding," but I think that's more a function of the character than the actor.

[4] I don't necessarily agree about Bridges, not that he can't play a wide variety of people convincingly, but that I don't think he projects the same sort of whip-smart cleverness that Nicholson does. Even when Jack tamps down the energy, like in KING OF MARVIN GARDENS, you can see those wheels whirring.

Bridges is under-appreciated. Has he ever been bad in a movie even when the movie was bad. I loved him in Fearless, which is also a great book.