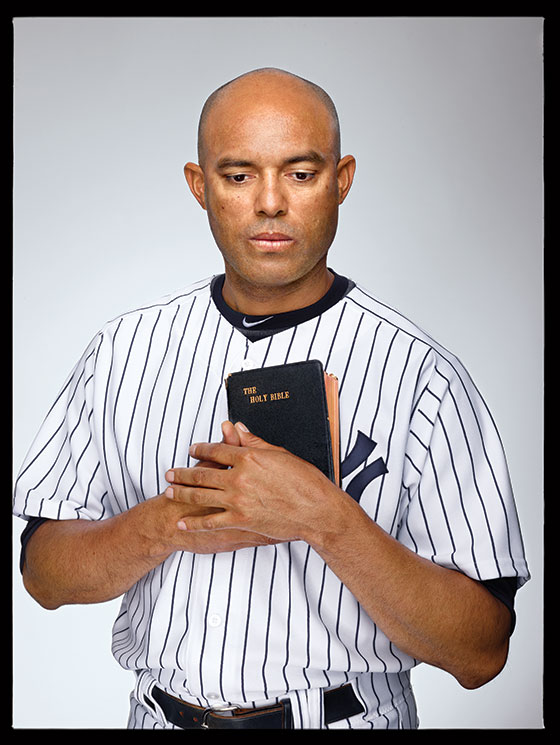 Three months into his final season, Rivera’s hagiography is already being written. He has, for seventeen years, been the Yankees’ closer, the specialist who arrives in the ninth inning to protect a tight lead, and at this he is better than anyone else who has ever played the game. With 21 saves so far this season, he is pitching as well as he ever has, at an age when other ballplayers have long since withered, and after a long winter recovering from surgery for a torn ACL, an injury that cut short his 2012 season and has ruined many players much younger than he. His teammates speak of him as a giant, and they express gratitude for the privilege of merely being able to walk in the clubhouse where he has walked; atop the Yankees’ Olympus, populated by Ruth, DiMaggio, Gehrig, and Mantle, there’s already a name tag on Rivera’s throne. Sportswriters see him as a mystery, for while other closers have had brilliant seasons, even stretches of three or four, no one else has ever been as good for as long, not nearly. In trying to explain his unprecedented and ruthless two decades of dominance, they’ll cite Rivera’s natural athleticism and the simplicity of his mechanics and they’ll mention the advantages of having been tutored and coddled during his long career by the rich, paternalistic Yankees organization. Rivera acknowledges these things with gratitude—all true, he says. But in his view, his greatness has no earthly source.

“Everything I have and everything I became is because of the strength of the Lord, and through him I have accomplished everything,” he tells me as we sit shoulder to shoulder in the Yankees dugout on a temperate, breezy spring day last month. “Not because of my strength. Only by his love, his mercy, and his strength.” It is the first of several conversations about God I have with Rivera, over several weeks, and in each meeting I find myself struck by how eager he is to put baseball aside and speak openly, and at length, about his faith. Even as Rivera denies that his talent belongs to him, I steal a look at his magic right arm. “You don’t own your gifts like a pair of jeans,” he says.

By that reasoning, I venture, you might say that even the cutter doesn’t belong to you.

“It doesn’t,” he answers, nodding emphatically. “It doesn’t. He could give it to anyone he wants, but you know what? He put it in me. He put it in me, for me to use it. To bring glory, not to Mariano Rivera, but to the Lord.”

I was kinda/sorta underwhelmed by this.

It's the Lord's Cutter! Then why did Mo give it to Halladay?

Yeah ... He's kind of crazy but in a boring way. I'm still glad he's such a stand-up guy though.

I mean, it wasn't anything I didn't already know about him. I'm not critical of him being religious, do your thing man, but this read like 6 pages of scripture analysis. Which, fine whatever I went through 8 years of Catholic school so I can handle it, but it's kinda boring.

Well that's the thing, it's just an impenetrable wall of religiosity. He never ever goes off message; he may at this point be incapable of doing so, or at least he has zero interest in doing so. But it strikes me as a little monomaniacal.

Okay, I've been thinking about this for a couple of months, so I'm going public with it here, clearly the most deserving forum.

I predict that, even before Mo makes it into the Hall of Fame, they're going to name the award for each league's best relief pitcher/closer The Mariano Rivera Award.

"...it's just an impenetrable wall of religiosity." Yup.

I wanna be clear, I'm in no way offended by his spirituality or anything like that. It just doesn't make for terribly compelling reading, IMO.

I'd be surprised if he wasn't some sort of devout. He's been too good for too long at a single job to be ungrounded. I find the religion thing a little stifling personally, but it seems he's used religion as a tool for humility and connectedness. I think that's wonderful.

[8] I agree, it's nothing we haven't heard from Mo before and doesn't break any new ground; regardless of what you think of religion, the objective of the article and the article itself are superfluous. One of many that will be coming shortly, I guess...

[10] It wasn't shocking by any stretch, but I found some interesting bits and details in it. I was impressed by the overall relatively sophisticated treatment of theology (given how shoddily most current periodicals and newspapers deal with Christian theology), and I found his backstory interesting enough, though it was by no means surprising (as the article points out, Rivera experienced a conversion to Pentecostalism fairly common to many Latinos). Then again, I do find articles about spirituality and religiosity to be compelling reading.

Moreover, I don't see this as an impenetrable wall [7], et al. Rather, it is who he is. If you want to "get" Rivera, you have to accept this is a major component of his life: baseball is subsumed into his religiosity, it's not merely a tool to play better. The article did a decent job of trying to get him to speak in some more detail about the matter. Again, I don;t see this as impenetrable, but rather a window into his thinking.

What I suspect is that, as many have noted, for those who don;t "do" religion, or care to read about religiosity, the article will bore. But I don't think that's the fault of the article.

[12] yes, I'll say that for the article. The author treats the subject with respect in that she's not afraid to get into a legit theological exchange with him (when the hell's the last time you saw St. Augustine referenced in a weekly magazine?!), as opposed to a lot of the stuff written about...I dunno...Tebow.

[12] I understand it's who he is, but it means there's just not much to him when you read about him. When 99% of what you say is filtered to the point where it's boilerplate, almost no matter what that filter is, it becomes very monotonous and dull quickly.

But overall for me, I would go nuts listening to this kind of talk all the time. There's nothing worse than every issue and conversation ending with someone confidently saying "The Lord this" and "The Lord that". Just not interested.

The only thing I really found of interest along those lines was his anti-Catholic slant that was referenced.

Ultimately, it's pretty trivial, how an athlete comes off in an interview or whatever, and like I said at least he's a good guy and not some arrogant douche. But as Raging says, it's not that compelling, is all.

Think I'll skip this article, seems a good enough summary from the Banter peanut gallery. Wonder if Mariano will become a preacher when he retires? Said it before but I still think he's be the ultimate tea master over this side of the ocean..perfect mechanics, every step beautifully in balance, repeated endlessly.

It's weird, usually religious talk coming from athletes bugs the hell out of me but with Mo it doesn't bug me. I like the way Ben said it in [8]:

it seems he's used religion as a tool for humility and connectedness.

I don't mind religion if people really do live and breathe it; it's the hypocrisy that bugs me to no end with the zealots.

Although the feature didn't break new ground, it wasn't boring. It's actually quite interesting to hear Rivera open up so much because, while he has never been shy about his faith, he rarely discusses it with so much depth. I realize that being religious is increasingly frowned upon in these more secular times, but in an era in which athletes are so eager to worship themselves, Rivera and those like him are refreshing in their commitment to something other than themselves.

[15] The article mentioned that his wife will be ordained, but I don't think it mentioned anything about Mo.

[14] Well, I think you and I are saying basically the same thing. You're not interested, and so the article is not compelling. I'm more interested and so I found the article more intriguing (though my no means amazingly interesting or revealing). I too would go nuts listening to "this kind of talk al the time." But of course, I don't listen to this kind of talk all the time, so reading one medium-length article focusing on a celebrity's apparently legitimate, deeply held, and seemingly thoughtful religiosity (albeit a brand of religiosity I do not share) didn't bother me; indeed, I found it mildly interesting.