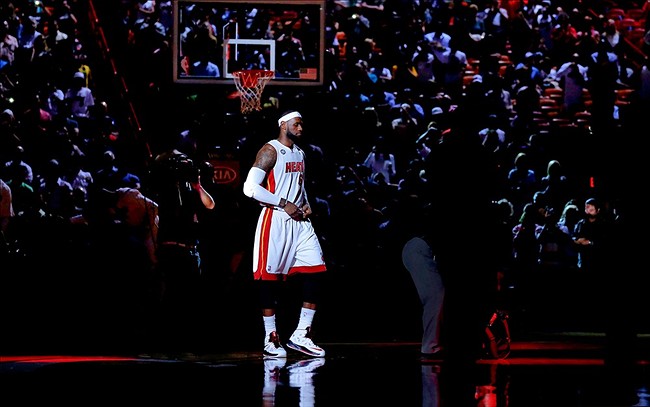 So LeBron James hasn’t played especially well in the first three games of the NBA Finals. He was particularly bad in Game 3. So I asked a friend who knows from basketball for his take. And this is what he e-mailed back to me:

He’s been held under 20 points all three games. There’s two sides to this.

The Spurs have a sound scheme. The Pacers gave the Heat trouble with their two bigs, and the Spurs are doing the same (except they have more offensive firepower). They’re laying off Lebron, tempting him to shoot jumpers, but he’s got a drive-first mentality that’s mostly good bball instinct but partially a hangover from the last series. The Spurs’ wings, Leonard and Green, are a great first line of defense, and with Duncan/Splitter in the middle, it’s really hard for him to find room. Leonard in particular is staying on his feet and not sending Lebron to the line. The Pacers let Lebron post up Paul George one-on-one and got burned, but the Spurs aren’t letting him back down for several seconds. So Lebron’s only option is driving and dishing, which means good assist numbers but not enough to combat that shrinking feeling that good defenses create. On top of that, the Heat rely on transition baskets– they either have to force turnovers or break off the defensive board. But the Spurs are shooting well AND Lebron & Co aren’t battling hard enough for the rebounds. (Mike Miller has to be playing for his 3s, but he’s almost as much of a defensive liability, somewhat due to lack of playing time.)

So the Spurs are doing what they should, limiting Miami’s strengths and magnifying their weaknesses.

But Lebron is clearly discouraged. He has lost confidence in his teammates, at both ends, and it’s affecting his effort. And he’s not getting the calls he’s used to, which will be especially true away from home. I think he thinks if he really asserts himself again and goes pure alpha-dog for stretches, he’s going to alienate them. And asserting himself means quick possessions, and it means launching long bombs and/or taking on three guys on the way to the rim.

I’ll tell you this. If the Heat are going to win a game in SA, Lebron’s going to have to have a 4-to-6-minute run where he does everything.

Then I asked him if he thought James would overcome these obstacles and he replied:

In the world where Tony Parker is hampered by a flukey hamstring injury, as he might be? Absolutely. Lebron would seize on that advantage, the unsteadiness it would create in the Spurs’ young guys, lead his team to ramp up defensively, and grab the momentum.

But if Tony Parker’s fine? I think Lebron’s going to have a couple more aggressive games, but it won’t be enough. Parker and Duncan and Leonard are too calm, and Pop’s got too sure a hand. They won’t get rattled.

That being said, Lebron is among the great ones. And what defines the great ones isn’t that they win all the time, no matter what. It’s that, despite superhigh expectations, they manage to surprise on the biggest stage. They face that moment when “isn’t he able to do more?” becomes “no, it’s not possible he can rise above this”, and they go ahead and do it. And I will gladly leave the door open for greatness.

Then I read this from Michael Wallace at ESPN. Tonight should be interesting.

I'm an unabashed LeBron hater, I recognize the supernatural talent but I get tired of people telling me I *HAVE* to root for him lest I be a "bad" fan, but I basically agree with the above.

I think two things are at work here: One, the Spurs are really effing good. They have three Hall of Famers playing at or near the top of their abilities (Parker's hammy notwithstanding, and yeah Tim is old but he's adjusted and can still impose his will on a game much like an older Robinson). Frankly I think they're just better than the Heat all around, Miami has the best player but if you want to go man-to-man I think that's the only battle they win. San Antonio is superior in every other facet.

Which brings me to my next point...this Miami team reminds me a whole lot more of the '07 Cavs than it does the '12 (or even '11) Heat. One all time great, surrounded by role players of varying ability. Because let's be honest, Bosh has basically turned into a very expensive Anderson Varrejao and Wade is decaying before our eyes. So if you're LeBron who do you look to? Norris Cole? Chalmers? Please. Which is where frustration sets in, which leads to mistakes.

Miami has won games time and again by letting an inferior opponent hang around into the second half and then going on some insane run over a 7-8 minute stretch. Which is how they won Game 2, but I don't think SA will allow them to do that 3 more times. I still think they can very well win this series, just because they have a guy who can go off for 40/20/10 every single night, but they're in serious trouble.

the spurs defense is doing a superb job - but lebron is also letting their d dictate what he does rather than dictating and having them react. what the spurs are really tapping into is lebron's ability and desire to make the smart b-basll play. but with wade and bosh hurt and battier in a horrible slump (battier losing minutes to miller is hurting the heat's d)the heat's offense can't depend on lebron making the right play right now. he has to attack sa faster and in different spots - rather then lebron looking to create for his teammates tonight i think there needs to be more attempt to create for him. i hope and think that will happen tonight.

I think it's a little bit of a stretch to compare with them the '07 Cavs but I get your point. Wade is really hurting and Bosh doesn't seem to be much of an impact player. Be curious to see what happens. I'm hoping the Spurs win but would like to see it go to 6 or 7.

bosh is hurt too. i don't think it is fair to say he isn't an impact player. his defensive rebounding could be more consistent, but his mid range game and trap defense is very good and a big part of the heat's scheme.

Wow. Does not bode well for the Miami's. I guess Shane is really hurtin'.