< What’s the Happs?      This Is a Neighborhood, This Ain’t No Residential District > 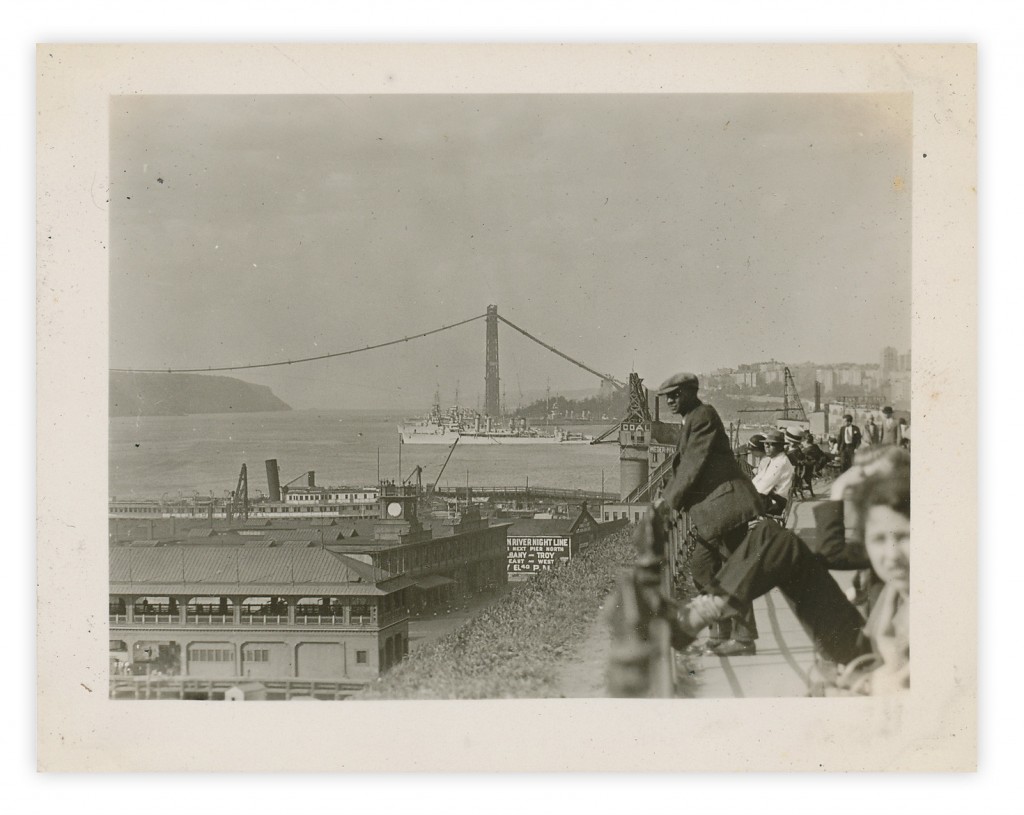 Lookit what our man Michae found–that there looks like the GWB.

I think it's the Mid-Hudson. Two reasons.

1. I think if it were the GW, the little lighthouse would be visible on the shore.

But neither is very conclusive.

I bet Chyll Will can help with this.

Was the lighthouse there before the bridge? Also, looking at the shore line, it seems built up with buildings. Would it have looked like that upstate?

Yes, the lighthouse was there before the bridge, at least according to The Little Red Lighthouse and the Great Gray Bridge, but I'm not certain about it being the Mid-Hudson Bridge only because I don't see the railroad bridge behind it; unless that was built later. But then, that does look like the original Poughkeepsie train station. I'll check on this...

...after some quick research, I'm going to conclude that it's likely the GW Bridge by process of elimination; the Poughkeepsie Railroad Bridge (now the Walkway Over The Hudson) was conceived during the Civil War and first operated in 1888. That means it would have been there in 1924 when they first broke ground for the Mid-Hudson Bridge (the towers didn't go up until 1928, way after the publication of this picture).

But here's where it gets dicey. The GW Bridge did not begin construction until 1927. So either the publication date is wrong, or the identification is wrong. I checked on RI's eagle-eye spotting of the ad and found this ad that specifies docking locations on the west side of Manhattan and at Yonkers. I'm willing to bet that the geography of the West Side was a lot different in that era than today; the land where Battery Park City now exists is landfill from when they were building the original Twin Towers, so the land that comprises of the present piers was probably not there before (witness on 11th Ave near the Meat Packing District where warehouse buildings have signs indicating their pier numbers).

I think the publication date was wrong and this is the GW Bridge in 1928-30, or we never would have had this picture in 1925. Also, the lighthouse is on a tiny hook and is easy to miss if you're not looking for it. From the angle and the likely location from where the picture was taken, the lighthouse would easily be blocked out by a ship, building or natural topography.

Also, this ad is some evidence that the "Night Line" cruises left from piers in uptown Manhattan, and from Yonkers. So maybe it's the GW and that ship is obscuring the Little Red Lighthouse.

This is an excellent game!

Oh, man, you beat me to the ad evidence!

I'd agree, Will, except I find it very hard to believe that the imprint date of the book is wrong. And it couldn't be a photo added in a later edition, because there were no later printings.

I found a library that has a copy. I'm going to see if they'll let me look at it tomorrow. (It's not in the stacks.)

The publication date of the book is irrelevant. Michael Popek meant that he found the picture between the pages of the book. (Note the title of his blog!)

So I'm on board with the GW now.

There should be a whole blog full of these History Geography Picture Puzzles!

It's definitely the GWB. The land jutting out on the "jersey" side is the same now, with the cliffs looking east on this land (not facing the photo perspective) the view of Palisades from Yonkers. There are no cliffs facing Poughkeepsie on the western shore of the Hudson.

When driving up the West Side Highway, one can see this perspective of the land on the Jersey side.

And...I think you can see the Little Red Lighthouse as a faint shadow just to the right of the bridge tower on ground level. It is little, but as red as the Yankee field is green in old B&W photos.

If you like this game, let me recommend making http://www.shorpy.com a daily visit.