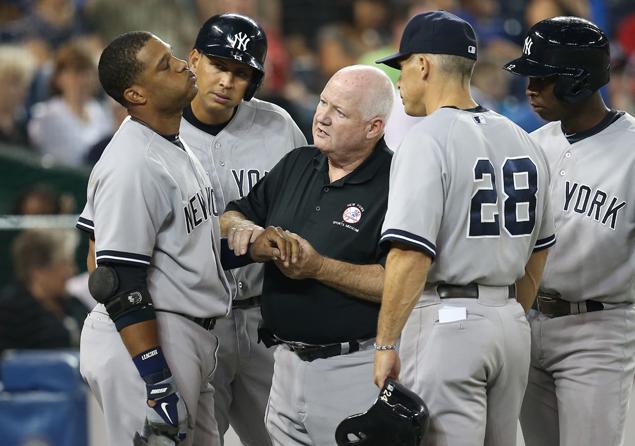 J.A. Happ hit Robinson Cano in the hand with a pitch in the first inning which gave the Yankees a good scare. Cano’s hand isn’t broken but still, Happ is the same guy who broke Curtis Granderson’s hand earlier this year and while he wasn’t throwing at Cano intentionally, Ken Singleton suggested that perhaps he should not be throwing inside to lefties if he can’t do it without hitting them.

Cano’s injury weighed on the minds of the Yankees and their fans  all evening. In the meantime, the boys proceeded to kick the crap out of Happ. In fact, Alfonso Soriano, who followed Cano in the lineup, hit a 3-run home run, his first of 2 homers against Happ. Alex Rodriguez added a long home run later, and Mark Reynolds also hit a solo shot. It was more than enough for Andy Pettitte who pitched 7 scoreless innings. The double play ball helped as the Yanks turned 4 of them and evened the series with a 7-1 win.

Was dreading the news this morning. Don't mind Robbie taking the day off.

The conversation between Singleton and Leiter was interesting. I see Singleton's point about not pitching inside if you keep hitting folks. But the pitch wasn't in the batter's box. It was just several inches inside. Leiter countered that a hitter should be able to get out of the way of that pitch. Singleton came back with that pitchers can't take away a hitter's tendency to try to cover the entire plate by throwing inside. And, of course, Leiter told him that's EXACTLY WHY pitchers throw inside.

[2] Wait a minute. First of all, Leiter plainly says, "You can't get out of the way!", when they're watching the slomo replay. Did he later say Cano should have got out of the way of the pitch?

Second, I am pretty sure Robinson's hand was indeed in the batter's box when the ball hit him. Look at how his hand lines up with Arencibia's right foot.

And finally, I don't really care why pitchers throw inside. The rules should be changed to give pitchers a real incentive not to hit batters. Because otherwise they're going to continue to hit batters, and continue to injure them.

[3] The opposing team's pitcher could give out a good incentive by starting to plunk a few batters himself. If a pitcher can't pitch inside without hitting batters and his teammates start getting hit as a result, those teammates might start to "encourage" their own pitcher to not be so "wild" when they pitch inside...

NL pitchers hit batters at a much lower rate than AL batters. This suggests that the more direct incentive does work. (In fact, it doesn't just suggest that -- pretty conclusive, I'd say.)

[5] It's probably not a perfect system, but I think it has been the way it has worked in the past. You hear a lot of old school baseball people talk about the players "policing themselves". But, nowadays it seems like the umps are too quick to get involved with warnings and such which hampers the opposing pitcher's ability to rectify the situation. The umps (most likely directed by MLB) in their efforts to "solve" the problem of batters getting hit might actually be making the problem worse. The recent Red Sox/Dumpster/Arod fiasco is a good example. All the warning did was keep CC from retaliating. But, in the meantime, two more Yankees batter ended up getting hit while the Yankee's pitchers hands were "tied". If CC could have drilled Oriz in his Fat Papi then maybe when Ortiz got back to the dugout he could have had a little talk with Dumpster about the ramifications of player "executioner" on Arod (especially since, according to recent reports, Ortiz didn't agree with him hitting Arod in the first place).

Just seems like a classic case of unintended consequences. I say let the players police themselves.

I'm just skeptical that the old method worked, is all.

[7] I understand and I agree with you, but the new method doesn't seem to working either. I just hate to see so many Yankee hitters getting hit (and injured) without much being done about it...

[6] I'm almost certain Ortiz spoke with Dumpster about that; we're trying to figure out why he came out in public against the HBP in the first place and the easy answer is that he's trying to protect himself from future retaliation. He went against conventional thinking in not keeping his mouth shut and supporting his teammate even if he's wrong; he knows he's gonna get it from someone somewhere and can't say anything else about it. I think most umpires would have handled that differently; this one was grossly derelict, so don't be surprised to not see him making extra dough in the playoffs. But the policing does work to some degree, and who can complain about the way the Yanks have responded to these incidents lately?

By "that" and "this" I mean the A_Rod HPB and umpire Brian O'Neal.