Ain’t Nothing But the Real Thing, Baby 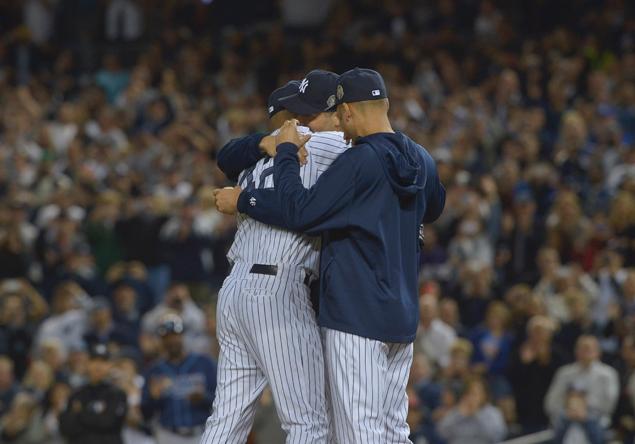 For the Yankees, it was a nothing game. It was waiting to see Mariano Rivera who came in the game in the 8th inning, the Yanks trailing 4-0. But what we’ll remember came in the 9th. Mo had retired all four batters that he’d faced and here was Andy Pettitte and Derek Jeter walking to the mound in place of Joe Girardi. Big smiles. Pettitte signaled for a relief pitcher. When Rivera saw them coming he smiled too. Jeter said, “Time to go.”

Mo gave the ball to Pettitte, hugged him and that’s when he began to sob. 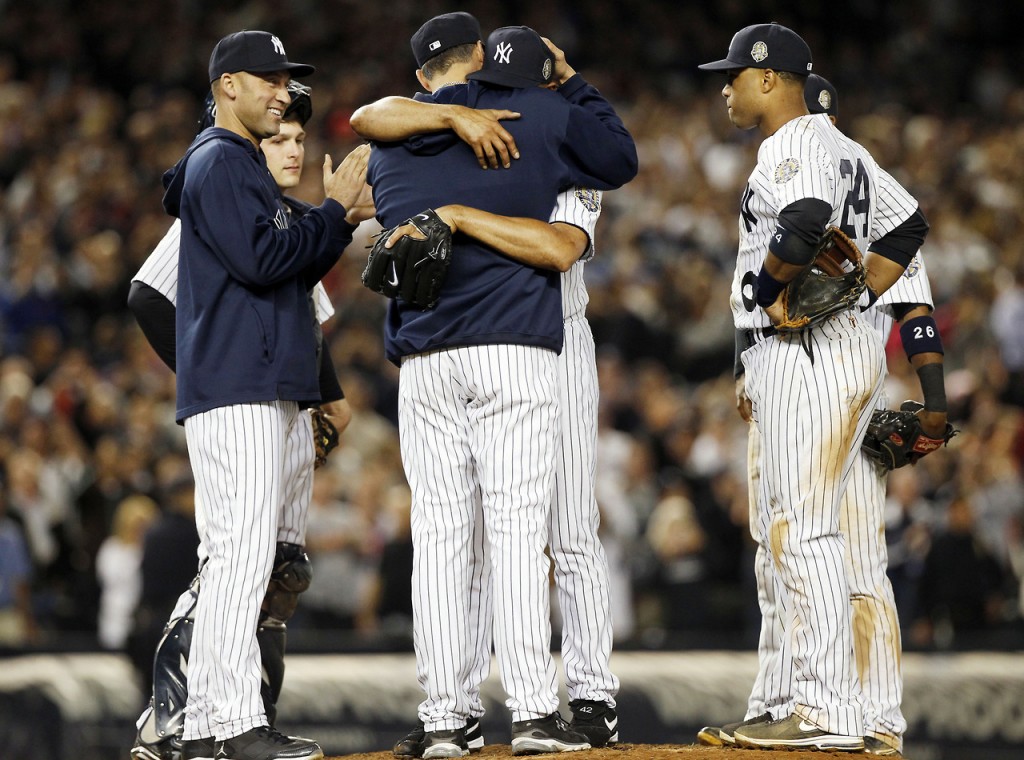 Jeter stood there grinning as if he was uncomfortable by the emotion. 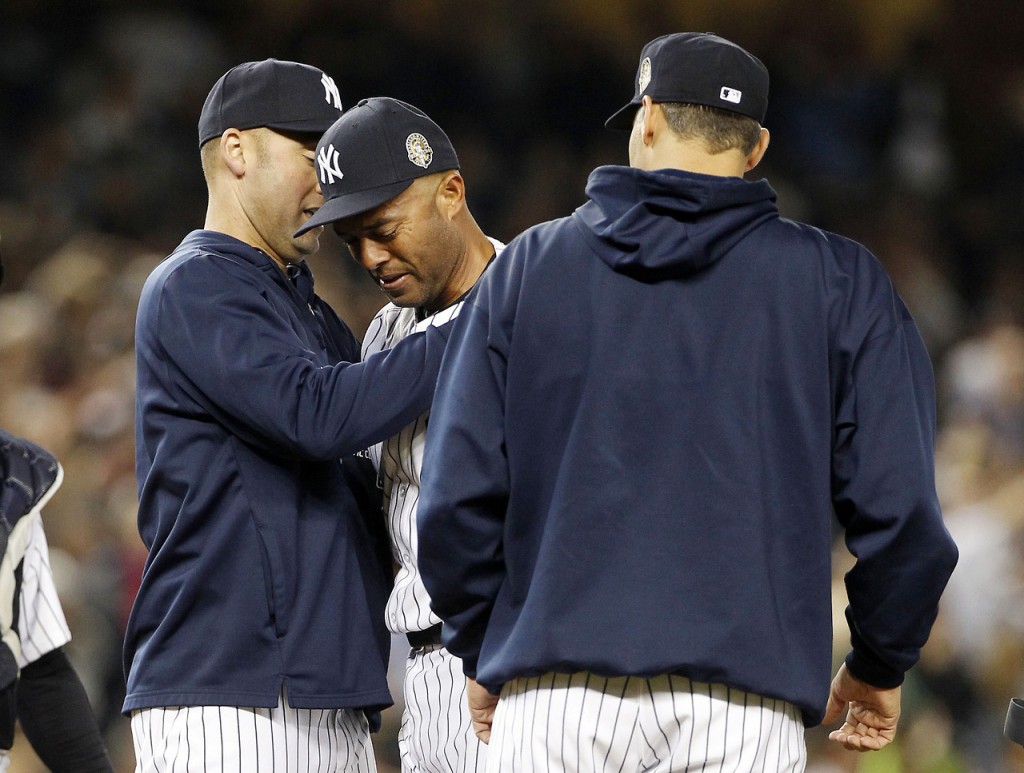 For all of the manufactured sentiment this was the real thing. The next twenty minutes was Mo’s long goodbye. Walking off the field to an ovation, hugging his teammates, saluting the Rays, who clapped for him along with everyone else in the building. When the game was over,  Mo stayed in the dugout. He wasn’t alone because there were what looked to be a few dozen photographers feet away taking his picture. They were just doing their jobs, of course, but I couldn’t help but think they were missing the point. A close-up shot wasn’t the image there–a long shot of Rivera by himself in the dugout, that was the picture. A man alone in public, saying goodbye, privately but in front of everyone too. The photographers cleared a path when Mo walked to the mound for a final time, stood on the rubber, poked his foot into the earth and then bent down and took a handful of dirt before walking off and doing a final interview. 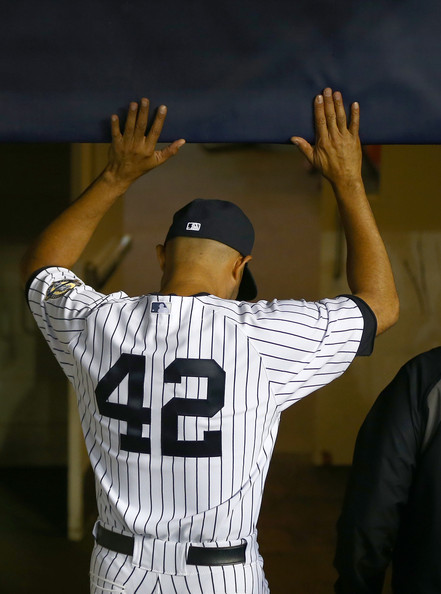 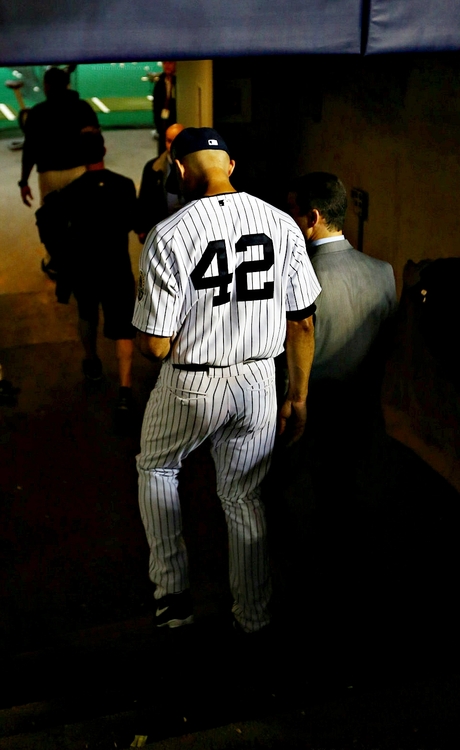 Bless him, Michael Kay tried to sound stately on the YES broadcast. And if he doesn’t have the chops to pull that off he deserves credit for being a minimalist for once.

It was a melancholy scene. The air was cool, October coming, but for just the second time in 19 years, there will be no playoffs in the Bronx. That’s Mo’s time. He has to settle for an outpouring of affection, genuine or processed, that few players ever enjoy. It is enough. He was, and is, our man and it’s hard to image that we’ll miss another player more. 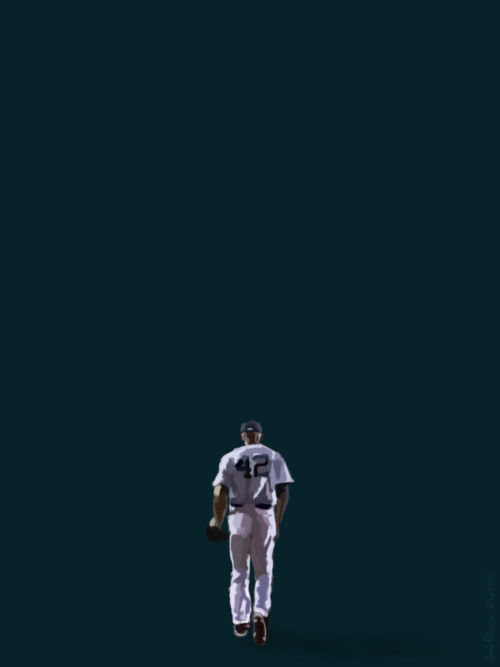 It was definitely a great moment. I enjoyed watching Sunday, but that was just a celebration. Last night was a lot more than that. It was celebratory, certainly, but mainly it was a goodbye. I had the whole family watch together and explained to everyone what was going on. It was difficult for me to talk about, but I wanted them all to know. After all, how exactly do you explain how much this man, a man you'll never meet, has meant to you on a personal level for the past 18 years? How can you find the words to explain the significance of that embrace between Rivera and Pettitte? (My wife even got a bit teary at that.)

I cried, but they weren't tears of joy. The realization that I'll never again see him throw a pitch for the Yankees (why would he pitch in Houston?) was simply overwhelming.

The pitcher will be difficult to replace. The man? Impossible.

I'm uneasy talking about Rivera, the man, because I have no idea what he's really like. But that's me nitpicking. I understand what you mean--his public persona. It will be missed for sure.

[1] Very well said. I attended Sunday's game and watched Thursday night on TV and was much more moved by Thursday's events.

On Sunday we participated in a ceremony and exchanged heart felt thank yous. But the game mattered as well and we were all tense about the outcome and that was a weird juxtaposition with Rivera's entrance. He came in the moment after the lead, and possibly the season, was lost. And then he came back out the moment after that rally fell apart. We had no time to mourn the 2013 Yankees, or whatever it is we needed to do with them. It was a mix of emotions that is hard to sort out.

On Thursday, the focus was laser-like and there no tension or conflicting emotions to distract from Rivera. And also no tension to distract Rivera himself. So that moment at the end was magical and pure in a way that nothing previously manufactured could have been.

I've watched it 3 times and will cue up a 4th tonight becuae Henry still hasn't seen it. I showed it to the Pirates fan this morning and, even if he wasn't converted, he was mesmerized.

It makes me feel old. He's retiring and he's younger than me!

Mo was always pure class and I remember so well the 7th and 8th innings in 96 when he would deliver those pitches with such a smoothness and the way he would calmly walk off the mound without any theatrics. I am sure players on other teams must have respected him so much more, because he never showed them up, and had many opportunities to do so.

Closing out huge games later in his career and he had almost the same expression closing out a game as when he would blow the very few saves. If he blew the save he would shake his head or sometimes say "Wow." He always appeared to be a man at peace.

I will truly miss him.

This morning I was struck by a realization that I knew was coming, but it struck me just the same. The Yankees are so much more like any team now. Their history can't be denied, or taken away, but Mo is essentially what separated them from the pack the past 18 years.

He was the difference more than anybody else.
And now he's gone.

We still have a Hall of Famer or two on the roster, but they're not really difference makers anymore.

Mo made the Yankees unique right up until he walked into the clubhouse, and into baseball history last night.

Now, the Yankees are so much more like any team than they've been in a long, long time.

Last night was the first time sports made me cry in, I'm really not even sure how long (Super Bowl XLII maybe??). Mostly because of the passage of time it marks. I can remember being home sick from school and staying up late during Game 2 of the ALDS in '95 when Mo came in and held Seattle at bay. Now I'm almost 30 and getting married in two weeks...and he's walking off the mound for the last time. Something like that makes you think about everything and everyone who has come and gone in your life over that time. It's a lot to process.

I'm sad, but more than that I'm thankful. I'm thankful I'll be able to say that I saw the greatest of all time do his thing in person dozens of times. I'm thankful for all the postseason moments. I'm sure Enrique Wilson is thankful for one of the blown saves (Google it). I'm thankful he never put Yankee fans in a position to have to defend something stupid he did. And more than everything, I'm thankful I'll never have a memory of him getting knocked around the ballpark after hanging onto his career one year too long.

It's amazing to reflect that Mo's first postseason game in Yankee Stadium was Mattingly's last. (Of two.)

As a 48 year old man (Yankee fan since 1976)with teenage kids born in the late 1990's, I spent many long hours watching these three guys in late October in a chilly house with mom and kids in bed. What a great night for a great player, and a great man.