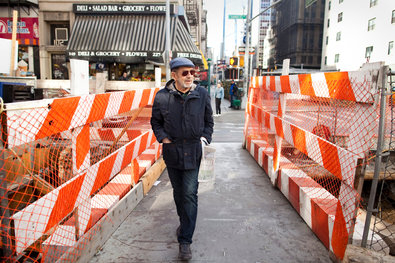 A day in the life of Pete Hamill:

If it’s a beautiful day, I love taking walks. The walks are always aimless. From where I live, I like walking to the Battery, where so many people, including my own parents, came through that harbor and passed into Ellis Island and became Americans. You can just sit on a bench and look at the harbor, or look at the people. Like being a flâneur. You can just wander around and let the city dictate the script.

And here is Hamill’s review of The Boy Detective by Roger Rosenblatt:

To enter the world of this wonderful memoir is to leave the dull certainties of home and go wandering. The author’s destination is always the great wide world Out There, and through his sharp, compact prose, Roger Rosenblatt takes the reader with him. He is, after all, what some 19th-century Parisians called a flâneur, a stroller sauntering through anonymous crowds in the noisy, greedy, unscripted panoramas of the city.

In that role, Rosenblatt has no exact destination. In unstated homage to such wandering scribes as Walter Benjamin and Charles Baudelaire, he doesn’t consult Google Earth or a guidebook. He doesn’t need a tour bus or a taxicab. He walks the streets like a poetic stray, embracing chance and accident, inhaling the gritty air of his true Old Country, a Manhattan village called Gramercy Park. He is not, however, parochial. Sometimes he slips over the border to make the strange feel familiar. Along the way, he bumps against human beings he almost surely will never see again.

Those nameless men and women are moving in the streets, retreating into shops, escaping snow or wind in the churches, the schools or the malls that have replaced the arcades once so precious to Parisian flâneurs. At times, a single person is the object of his scrutiny. Above all, his subject is people one at a time. He studies them, he says, like a detective. Clothes, hairdos, shoes, postures. And eyes, which say so much without words about what used to be called the soul. Rosenblatt tells us he has been doing this since his age was written in single digits. Detective fictions filled his head with ways to see the world, really see it, and then try to figure out what he was doing in that world. He suggests that though he studied at Harvard, and even taught there, his most important education came from popular fiction. Above all, detective fiction, starting with Sherlock Holmes.