Well I guess it’s about time for another Where & When.  The last couple of games have been pretty interesting if I do say so myself, here’s hoping I can keep that ball rolling (as opposed to what the Yanks defense did last night) with his, as it turns out, rather dour entry to the canon.  I dedicate this one to our rather illustrious Gloomy Guses of the Banter: 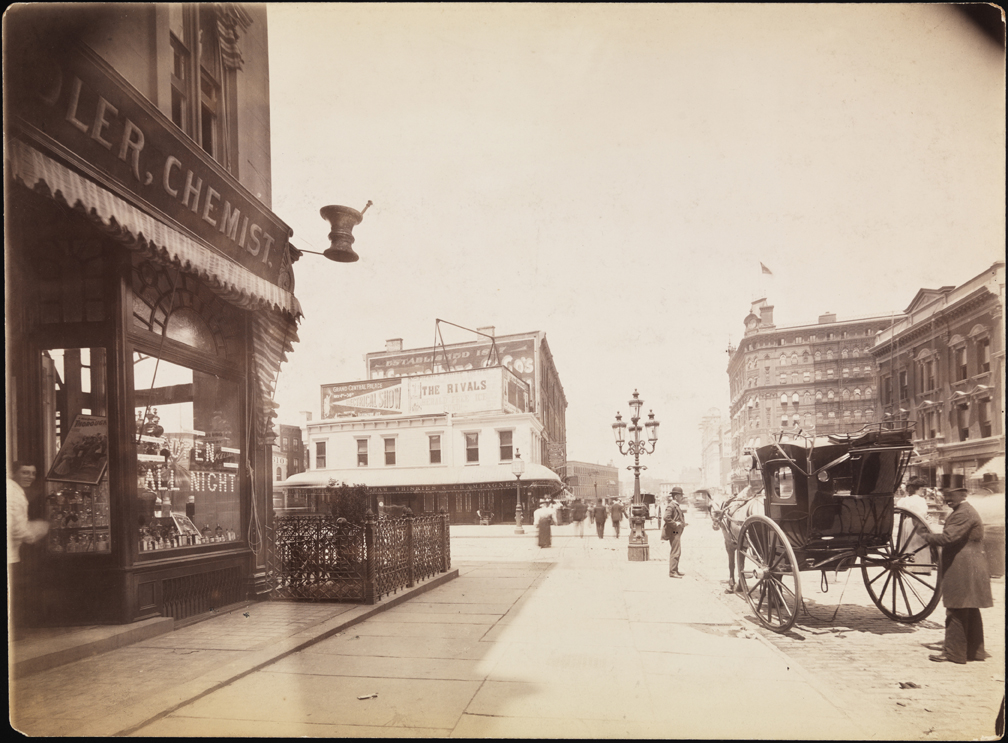 I’m going to spare you a whole lot of drama on this one, because unless you’ve got a real eye for details you’re likely not going to get a clue within this picture of where this can be.  It’s in New York, in a place that would become very well known and lit up with activity starting a few years after this picture was taken (in fact, it was sort of already lit up at this point, but not nearly as much as it would be in the ensuing years).  In the direct center of this picture, a person who would become world renown and whose works would become synonymous with the neighborhood was born in a room in the building to the left of the lamp post. The picture was taken about nine years after his birth. Also, relative to what yesterday’s game ultimately was, the region would change it’s name in a few years and in time begin a tradition that endures to this day.

I’m tasking you with naming this region and the year this picture was taken.  I know it’s a long shot, but if you consider the clues I’ve given you, you won’t suffer as much.  Bonuses to whomever determines (my logic for one) the name of the person I refer to being born in the building I pointed out, the name of that building in particular and how this is relative to the people I dedicated the game to today (in jest, naturally).  It’s a long season as we fairly predicted it would be, so we gotta keep each other up until reinforcements arrive (and hopefully not by postponing the future yet again).  Root beers, cream sodas, floats and brownies, all that.  You know the routine, let’s do this like Leeroy Jenkins.

I like that the pharmacist was open all night.

[1] That's what I just told someone else!

Hmm, across the street is an ad for the Grand Central Palace. First one was built in 1893, second one in 1911, according to Wikipedia.
Blowing up the photo, I can kind of make out "whiskies & champagne"

And Sheridan's play "The Rivals", which is what I think that ad is for, gave us the character Mrs. Malaprop, from which we get malapropism.
http://en.wikipedia.org/wiki/The_Rivals

So I guess 1897. The Barrett Hotel, which is now a Starbucks.
Not sure about the exact play you have in mind; O'Neill was a pretty gloomy guy in general.

[7] I just laid this one over the middle of the plate for you, huh?

[8] That was actually the point; no play in particular, though a few certainly stand out.

"born in longacre square" got me this site, by the way.

I was coming up with bupkis

The hotel where O'Neill was born was later the site of the office building where I worked for about a year and a half. There's a plaque there.