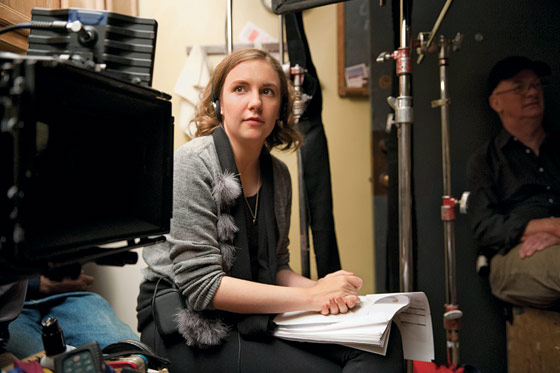 I’ve watched about seven or eight episodes of Girls and I just can’t get with it. But I dig it’s creator Lena Dunham, anyway. There was a nice profile of her by Meghan Daum in the Times magazine last weekend:

Of course, there’s a very good argument to be made that there are too many people, young women especially, writing about their personal experiences these days and not enough willing to report from the battle lines that exist outside their own heads. And Dunham’s alter ego on “Girls,” Hannah Horvath, a pathologically solipsistic aspiring personal essayist, is a prime example. In making her so, Dunham uses her work on the screen to wink at the conceits of her work on the page.

But even if she doesn’t tackle the Big Issues for a few more years, the fact is that she’s still just 28. When Ephron was 28, she was a reporter for The New York Post, “specializing in froth,” as she once noted. When Didion was 28, she was editing at Vogue; she had quietly published her first novel and was nowhere near the sensation she would become. When Parker was 28, she had finished a stint as a drama critic for Vanity Fair, and she and her compatriots were still working out seating arrangements for the Algonquin Round Table. None of them at that point had totally found their way to the issues that would come to define them. And despite the monumental platform Dunham has been given, that’s probably true of her too. She’s everywhere, but she’s still not there yet. That might have a lot to do with why people find her at once so exciting and so exasperating.

To Dunham, the most useful reaction to this endless onslaught of reactions is to just keep working. These days she is editing the fourth season of “Girls” and is in the early stages of writing a novel “about a professional woman entering her 30s and her relationship with several complex father figures.” She does, admittedly, thrill in the sight of her name in The New Yorker — or, more precisely, take thrill in her parents’ thrill at seeing her name there. She has also learned to cope with the cognitive dissonance that comes from receiving more good fortune than seems right for one person.

“I’ve had a lot of moments in my career where I’ve had to just say, ‘I’m picking my jaw up off the floor and carrying on,’ ” she said, stroking Lamby as his self-allergies sent him into another hacking fit. “Because you don’t get much work done with your jaw on the floor.”