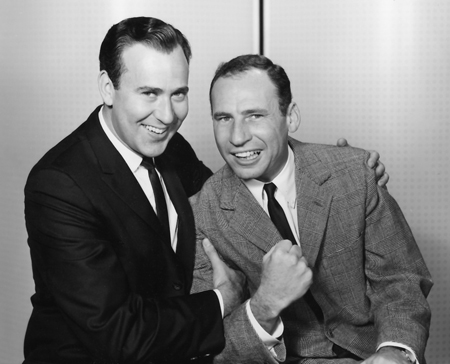 I Don’t Think Funny, but I Am Funny

Cliff hipped me to a terrific interview with Mel Brooks and Carl Reiner at the Onion’s AV Club:

AVC: Carl, you’ve said in other interviews that you’re against analyzing comedy. Why is that?

CR: Well, people have a comic bent or an angularity to their thinking, and those are the people who make jokes. And it’s usually people who were in an environment, when they were young, where jokes were at a premium, or at least considered important to a life. My parents always listened to the comedy radio shows, we went to the comedy movies, and my parents appreciated comedy. So kids listen and follow what their parents like.

AVC: Do you think comedy is something you can teach somebody?

CR: No. There are people born with intelligence; you’re not born with a funny bone. If you’re just a normal thing, the palette is there; it just depends on who puts the paint on the palette, and what they put on the palette when you’re very young. And then when you’re a little older and go to the movies by yourself, then you start making choices, and it’s usually honed by choices you made very early in your life.

MB: Where are you?

MB: I was always treated with love and respect and joy in Chicago.

When I was a kid, I looked through my dad’s extensive library of books and through his record collection. Most of the books didn’t appeal to me because they didn’t have pictures. There was a history of burlesque that was titillating, a book about the history of the Academy Awards, and two of the Illustrated Beatles books; otherwise, his books didn’t interest me until much later. The record collection was mostly made-up of Original Cast Recordings from Broadway shows, and folk music joints, from Burl Ives to the Weavers. My mom had some Simon and Garfunkel and Judy Collins lps in the mix, and there was a copy of A Hard Day’s Night, but that was as rockin’ as it got.

What was left? A handful of comedy records–Why Is There Air? and I Started Out as a Child by Bill Cosby, Vaughn Meader’s First Family record, the 2000 Year Old Man, and the 2013 Year Old Man, by Mel Brooks and Carl Reiner. My twin sister, Sam, younger brother, Ben, and I listened to the Cosby and Brooks-Reiner records until they were practically worn-out. We can quote them without thinking. Every time I get off the phone with my sister we say, “Goodbye…I hope I’m an actor,” a throw-away line from Brooks in the Coffee House sketch on the first 2000 Year Old Man album.

Sometimes, before my parents got divorced, the old man would listen with us and we would wait with bated breath for the parts that made him laugh. I practically memorized what jokes got him going. He had a big, almost violent laugh that shook the room. It was exciting and scary but a relief: the old man was happy, and that was enough for us.

It’s hard for me not to think of my dad and Mel Brooks together–it is as if Mel is part of the family, just like George Carlin was. Although the old man wasn’t a great fan of Mel’s movies, he never tired of the 2000 year old man routine. Brooks has made a couple of memorable movies but his true genius is captured on these recordings, or on some of his talk show appearances. (Have you ever read the 1975 Playboy interview with Brooks? It is nothing short of hysterical.)

So I smiled this morning when I read the following interview with Brooks and Reiner in the Arts and Leisure section of the New York Times (they are promoting a new boxed-set of the 2000 recordings):

MEL BROOKS: At the beginning it was pure made-up craziness and joy, and there was no thought of anybody else hearing it except maybe a couple of dear friends at a party.

CARL REINER: It was to pep up a room. We started on “Your Show of Shows,” and sometimes there would be a lull [in the writers’ room]. I always knew if I threw a question to Mel he could come up with something.

BROOKS: We had fun.

REINER: I remember the first question I asked him. It was because I had seen a program called “We the People Speak,” early television. [He puts on an announcer voice] “ ‘We the People Speak.’ Here’s a man who was in Stalin’s toilet, heard Stalin say, ‘I’m going to blow up the world.’ ” I came in, I said this is good for a sketch. No one else thought so, but I turned to Mel and I said, “Here’s a man who was actually seen at the crucifixion 2,000 years ago,” and his first words were “Oh, boy.” [He sighs.] We all fell over laughing. I said, “You knew Jesus?” “Yeah,” he said “Thin lad, wore sandals, long hair, walked around with 11 other guys. Always came into the store, never bought anything. Always asked for water.” Those were the first words, and then for the next hour or two I kept asking him questions, and he never stopped killing us.

BROOKS: It was all ad-libbed, and nothing was ever talked about before we did it. We didn’t write anything, we didn’t think about anything. Whatever was kinetic, whatever was chemical, we did it.

From the first record: