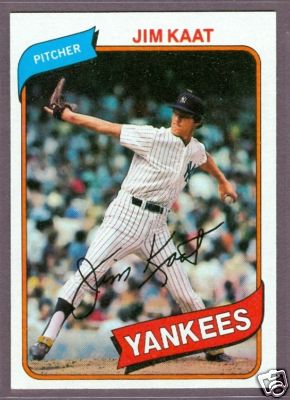 Throughout the new month, I’ll profile some of the former Yankees who will be coming to Cooperstown on June 21 to participate in the first-ever Hall of Fame Classic. The list of Yankee old-timers scheduled to play at Doubleday Field includes Phil Niekro, Lee Smith, Dennis Rasmussen and Kevin Maas. In the first installment, we take a fond look at the career of the man affectionately known as “Kitty.”

Jim Kaat has not thrown a meaningful pitch in more than a quarter of a century, but I can still see that pitching motion in my mind today. The photograph from his 1980 Topps card brings it all back: a delivery featuring virtually no windup and the smallest of leg kicks, accompanied by a mechanical precision. It’s no wonder that Kaat’s career lasted a marathon of 25 seasons with hardly a stay on the disabled list.

Like Bert Blyleven and Tommy John, “Kitty” is part of a contingent of longtime starters who fell just short of the 300-win club but remain on the cusp of election to the Hall of Fame. Unlike Blyleven, I’ve never given Kaat a vote in any of my mythical Hall of Fame elections, but I would not exactly shed a tear if he somehow joined the elite in Cooperstown. Though never really dominant and hardly an overwhelming collector of strikeouts, Kaat achieved a high level of successful longevity, fulfilling at least one of the requirements of Hall of Fame enshrinement.

As a pitcher, Kaat enjoyed two careers. The first spanned from 1962 to 1975, when he carved out a niche as a durable and effective starter for the Twins and White Sox. Over the course of his long tenure as a starter, I came to know Kaat for three attributes. First, he loved to throw the quick pitch, often catching hitters off guard by throwing without a windup. Second, he was a skilled and highly conditioned athlete who could run and hit better than most pitchers. (In 1973, Topps issued a card for Kaat showing him batting—not pitching—in a game for the Twins.) And third, Kaat could field his position like no other moundsman. With catlike reflexes that reinforced his nickname of Kitty, Kaat snared a record 15 Gold Gloves.

After joining the Phillies in the mid-1970s, Kaat moved on to his second career as a resident of the bullpen, pitching as a situational reliever and occasional long man. Along the way, he played parts of two seasons for the Yankees, in 1979 and 1980, before being sold to the Cardinals. He remained with St. Louis through July of 1983, by which time he had celebrated his 44th birthday. He could no longer pitch like he once did, but his conditioning left his body looking virtually the same as it had throughout much of the sixties and seventies.

Kaat took his knowledge of pitching and general high intelligence to his next job. Pete Rose, his former teammate with the Phillies and by now the manager of the Reds, hired Kaat as his pitching coach. In 1985, his lone full season as a coach, Kaat oversaw a 20-win season by Tom Browning and career-years for Jay Tibbs and closer Ted Power.

Ultimately, the demands of travel and disagreements over pitching philosophy led Kaat to give up coaching and move toward broadcasting. When Tony Kubek retired from the Yankees’ broadcast booth after the 1994 season, he left behind a crater-sized void at the Madison Square Garden Network, then the flagship station of the franchise. If nothing else, Kaat reduced the crater to a small nick. With his even-keeled commentary and subtle sense of humor, his unending insights on the intricacies of pitching, and his genuine appreciation of baseball history, Kaat made nightly telecasts on MSG and later the YES Network a simple but mandatory pleasure. Even in losses, I came away from Yankee broadcasts learning something new about the fine art of pitching. One night, it might be mechanical flaws in Ted Lilly’s delivery, the next it might be a dissertation on Jeff Nelson’s Frisbee slider. Other than Kubek, no one taught me more about the finer side of the game than Kitty.

Of course, Kaat had his critics. Every announcer does. Some from the Sabermetric community chided Kaat for being too “old school,” mostly because he never bought into the pitch count “religion.” I always felt that Kaat had a reasonable approach to pitch counts. I never heard him call pitch counts worthless; he simply felt that they needed to be looked at within context. As Kaat might say, Don’t just tell me what his pitch count is, but tell me whether he’s laboring, whether his mechanics are still good, whether he’s had to throw too many sliders or splitters. In that context, pitch counts could be a useful guide. They just shouldn’t be the be-all and end-all of determining whether a pitcher was cooked. Perfectly rational to my way of thinking, especially coming from a guy who lasted 25 seasons as a pitcher—the third best total in major league history.

So it was with a large helping of sadness that I heard about Kaat’s intention to retire from broadcasting near the end of the 2006 season. The rumors had swirled for weeks, but Kaat did not officially announce his plans until September 10, in the midst of a game against the Blue Jays. Kaat made it seem that his retirement decision came down to the standard issues of advancing age and fatigue, but I suspect that it really stemmed from a desire to tend to his ailing wife. In July of 2007, MaryAnn Kaat succumbed to cancer, with Jim at her side.

After taking some additional time to mourn the passing of his 22-year partner, Kaat decided to end his retirement, partly at the urging of fellow broadcaster Tim McCarver and Kitty’s business manager, Elizabeth Schumacher. Effective this spring, Kaat has returned to the booth as an analyst with the new MLB Network. He will provide analysis on the network’s Thursday night game of the week, giving fans at least a small dose of the kind of wisdom he dispersed on a nightly basis to Yankee fans (and enemies of the Yankees, too). Though he continues to write for the YES Network’s web site, I just wish that he had come back to the YES broadcast booth, where he and Ken Singleton formed the best of the many announcing configurations employed by the network.

Even though Kaat is now 71, he remains active both as a broadcaster and on the old-timers circuit. Not surprisingly, he still maintains terrific physical condition. If you could take away the lines on his face, he appears pretty much the way he did for the Phillies, Yankees, and Cardinals. He’s still shaped like a V, with those broad shoulders and that slim waistline. That’s why I won’t be surprised to see Kitty log a couple of innings in the Hall of Fame Classic. Heck, he might go three. Even if he doesn’t, I’ll just be glad to see him in Cooperstown.

Bruce Markusen writes “Cooperstown Confidential” for The Hardball Times and can be reached via e-mail at bmarkusen@stny.rr.com.

I would argue that in addition to his unsurpassed record as a fielding hurler, his longevity and broadcasting career merit enshrinement.

After all, on his "Similar Pitchers" list from BR, seven of the ten listed as similar to Kaat are in the Hall of Fame.

One would think they could at least get this one right...

Hey Bruce - excellent piece as always. I too really miss the Kaat-Singleton only combo on YES broadcasts. I do recall some outright rants by Kaat against pitch counts, which sadly would obscure some of his good points that you mention - but other than that, I think that was the finest pairing of broadcasters I've ever heard. Scooter and White and any of their thirds (Messer, Seaver, Murcer) might have been more entertaining, but I learned more from Kaat-Singleton than anyone else.

This is not a knock, but an observation: the brilliance of the Kaat-Singleton only booth, when contrasted to the Kaat-Singleton-Kay booth, often highlighted how much of a drain on the broadcasts that Kay could be (and sometimes still is).

[3] Beat me to it. Grrreat fielder. Not pretty. But, then again, Joba's flop and flip wasn't either.