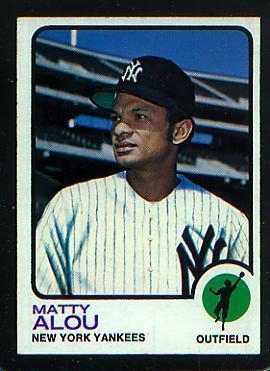 This is the only Topps card that shows Matty Alou as a Yankee. Upon first look, most fans are struck by the enormity of the Yankees’ “NY” logo. But it’s not the actual Yankee logo; it’s been airbrushed onto the photograph, along with the Yankee pinstripes and the navy blue cap. The artist who did the airbrushing simply overestimated the size of the interlocking “NY.”

In the actual photograph that Topps used, Alou is wearing the colors of the A’s, with the Oakland Alameda County Coliseum providing the backdrop. Alou spent the latter half of the 1972 season with the A’s, and played a subtle role in helping Oakland win its first world championship, before being purged by Charlie Finley in a cost-cutting maneuver. Without any photos of Alou in Yankee pinstripes, the people at Topps opted for the old airbrushing route.

All these memories of this card come back to me with the news of Alou’s death. He passed away on Thursday at the age of 72, apparently from the effects of diabetes. This is particularly hard news for me because Matty Alou was one of my favorite players. Though he only played part of one season with the Yankees, he was a guy who left me with a boatload of memories from various points throughout his career.

Why did I like Alou so much? I think part of it has to do with his unconventional hitting style. He used a very unorthodox style at the plate–he swung a heavy bat, often hit off his front foot, and blooped a lot of singles to the opposite field–all of which made him intriguing. Ted Williams, the most scientific hitter in history, used to say that Alou broke every rule of batting, but somehow managed to succeed. And unlike Williams, Alou was an extremely aggressive hitter who didn’t walk all that much. But the man could hit singles with the best of them. Alou batted for a very high average, which coupled with his base stealing ability and the speed that allowed him to go first to third, made him a useful player.

Alou began his career with the Giants, where he had the privilege to play in the same outfield with his older brother Felipe and his younger brother Jesus. But Matty never found his way in San Francisco. It was not until he was traded to the Pirates, where he worked with manager Harry “The Hat” Walker on his hitting. The Hat completely retooled Alou’s approach, and to his credit, Alou openly accepted the advice.

The results were undeniable. In 1966, Alou batted .342 to lead the National League. In his next three seasons, he batted .338, .332, and .331. That represents one of the great four-year stretches a hitter has ever experienced. Alou was also a very good center fielder with range and a plus arm, making him a fairly complete package in Pittsburgh. All that he lacked was power.

By the time that Alou joined the Yankees in 1973, he was no longer the same player. Injuries robbed him of his arm strength, while slowing bat speed erased his abilities as a .330 hitter. But the Yankees felt he could help fill a void in right field. The Yankees were set in the other outfield spots–Roy White played left and Bobby Murcer starred in center–but right field had become a problem. Alou stabilized the position somewhat, though he lacked the arm or the ideal amount of power that once expects from a right fielder. He also made 40 appearances at first base, something he had done previously with the Cardinals. At five feet, nine inches, Alou looked odd playing first base; he could have used a phone book to stand on first base and corral high throws from Gene Michael and Graig Nettles.

Alou hit well for the Yankees, batting .296 with an on-base percentage of nearly .340. If the Yankees remained in contention, Alou would have lasted the entire season in New York. But the Yankees fell out of the pennant race, convincing them to try a late-season youth movement. So they sold Felipe Alou to the Brewers and sold 34-year-old Matty to the Cardinals, ridding themselves of two expensive contracts in the process. And that was it for Matty Alou in pinstripes.

As it turned out, Alou did not have much left in his hitting tank. He batted only .198 for the Padres in 1974, but he did not want to call it quits. So he headed to the Japanese Leagues, where he put in three seasons before retiring.

Alou was still playing in the Far East by the time the Yankees became good again and won back-to-pennants in 1976 and ‘77. Like so many of my favorite old players, like Johnny Callison and Walt “No-Neck” Williams and Jim Ray Hart, he did not last long enough to see the glory years in pinstripes.

But at least fun players like Matty Alou made those lean years of the early 1970s a little more bearable for a Yankee fan like me. For that, I will be ever grateful to Matty Alou. Rest in peace, Matty.

This is a wonderful piece - thanks very much for this. The Alou's made a big impression on my then 8-year old self. Maybe I should have known better, but the news of his passing resonated with me much more than I would have expected.

While Hoss Clarke wasn't the worst leadoff hitter, I can remember salivating at teams that had a true force leading off... especially that guy in Pittsburg, who I thought (right or wrong) was the best in the game.

In those days, the Yanks getting a really good player in trade was a rare thing. Danny Cater was a great pickup and Curt Blefrey had a bit of value, but most pickups were castoffs and well-past-their-prime players. Maybe this was because the Yankees had nobody of value to trade in return?

Anyway, when we got Matty, I was STUNNED! ELATED! Literally FLOORED... as we got the BEST leadoff hitter in bastball (although he wasn't by that time in his career)!

And so what did the Yankees do with this truly great leadoff hitter who avereraged 2.5 HRS/yr?
...
...
...
We batted him THIRD!
Not Murcer. Not Munson. Nor Roy White, Nettles, Callsion or Bloomberg.
The Yankees batted the best leadoff batter and most famous slap hitter in the world...... THIRD!

Matty Alou showed what can happen when you prioritise making contact, as opposed to driving the ball. My guess is more balls hit 160' find grass, than those hit 320'. It's nice to watch Teix and Robbie and ARod and Swisher and Granderson hit the shit out of the ball, but those 160' soft LDs are really very helpful. Especially in the PS.

I really feel this is our weakness, and why our awesome offense is prone to slumps/bad games. We have an all-or-nothing offense. Even with 2 strikes, Gritner is the only one willing to cut down his swing.

There ain't nothing wrong with slapping at the ball. Just ask Ichiro.

I agree that the Yankees could use a Matty Alou or two in their 2012 lineup. They do need a better two-strike approach. We see way too many strikeouts and pop-ups with runners in scoring position.

[3] Huh? Where did the team finish in runs scored?

[3],[4] Perhaps more of an emphasis on situational hitting should be made during playoffs; when you know you're going against better pitching then normal for the foreseeable future, you should be prepared to cut down your swing when necessary. Is it just a mental block with some guys or what?

[5] The Yankees did outscore the Tigers over five games. I'm not sure there's much need for worry or change.

It was nice to see that the Yankees put out a statement on the passing of Matty Alou. While so many organizations have little sense of history, the Yankees remain steadfast in paying respects to their past, even in the case of a player who played part of only one season with them.