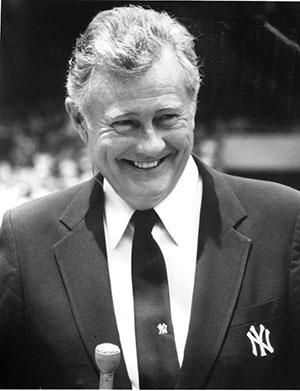 I’m always amazed how quickly time goes by. Another example hit me last week, when I realized that it has now been ten years since former Yankee broadcaster Frank Messer died. He passed away at the age of 76 in November of 2001, succumbing to a combination of heart problems and an ongoing battle with lupus.

In many ways, Messer is the forgotten Yankee broadcaster. In contrast to Bill White and Phil Rizzuto, his longtime broadcast partners on WPIX TV and various radio stations, no one talks about Messer anymore. It’s understandable that fans who are younger than 35 don’t remember Messer; they likely would never have heard one of his broadcasts. But even fans my age (and older) have placed Messer in a far-away corner of their minds.

Messer was never as popular as Rizzuto or White, but he had a career that is worthy of note. A native of Asheville, North Carolina, Messer joined the Marine Corps and served in the South Pacific during World War II. After a successful tour of duty that ended in 1946, Messer entered the field of broadcasting and eventually went to work as a disc jockey for a country western radio station. His baseball career finally began in 1954, when he entered the broadcast booth for Richmond, a minor league team in the Triple-A International League. During his tenure in Virginia, Messer won the state’s “Sportscaster of the Year” Award three consecutive years.

In 1964, Messer earned a promotion to the major leagues, joining the Orioles as one of their play-by-play men. He also dabbled in football, working radio broadcasts for the NFL’s Baltimore Colts. In 1968, Messer switched affiliations when he joined the broadcasting crew of the Yankees, replacing former major league catcher Joe Garagiola. Messer teamed with Rizzuto and Jerry Coleman–both former Yankee players–as the team’s regular announcers. (And yes, I am shuddering at the idea of “The Scooter” and Coleman working the same broadcast booth.)

Prior to the 1971 season, the Yankees made a milestone change in the history of baseball broadcasting. They replaced Coleman with Bill White, a retired first base standout with the Giants, Cardinals and Phillies and a man with no previous connection to the Yankee franchise. White became the first African American to broadcast a major league team’s games at the local level. The trio of Messer, Rizzuto, and White would become synonymous with Yankee broadcasts over the next 14 seasons, splitting play-by-play and color duties on both radio and WPIX television.

Messer took on the role of Bud Abbott, playing straight man to the two former players. With Messer providing smoothly efficient play-by-play, Rizzuto and White became free to take on more colorful and often comedic broadcast roles, while also offering the perspectives of former star players. The trio became one of the most popular broadcast combinations of all-time, remaining a team until 1984, when Messer ended his tenure in New York.

Working amidst the popular three-man crew that announced Yankee games during that span, Frank Messer was unquestionably the least favored amongst the pinstriped faithful. Yet, that’s more of a tribute to the enormous popularity of Rizzuto and White than it is a genuine blemish against the record of Messer.

Rizzuto and White drew most of the attention, in part because they were former athletes with bigger names, and in part because of their tendency to toss barbs at each other. At times, they could provide hysterical listening. Messer supplied the basics needed in a solid television or radio broadcast. He had a pleasant voice, a smooth play-by-play style, and a small ego, the latter enabling him to accommodate the colorful storytelling of Rizzuto and the insightful analysis of White.

Although the Rizzuto/White combination provided the best listen of any of the three tandems the Yankees commonly used on TV, Rizzuto and White also worked well with Messer. They each had freedom to roam, thanks in large part to Messer’s understated style. Additionally, nine innings of Rizzuto and White might have produced overkill; Messer’s presence for six innings gave the broadcast balance and clarity, while also making listeners appreciate the entertainment value of the more dynamic Rizzuto and White.

Though it was not the principal part of his job description, Messer also added a dignified presence to the Yankees’ popular Old-Timers’ Day events. An articulate announcer and a skilled emcee, Messer elegantly performed his master-of-ceremonies duties in introducing Yankee greats during the seventies, eighties, and nineties. Although he didn’t match Mel Allen (something that few could have done), he nonetheless excelled in a humble, simplified way, enabling him to blend in so well with the festivities of the day. As great as Old-Timers’ Day remains, it’s not quite the same without the presence of Messer.

If there was a legitimate criticism of Messer, it was that he tended to stray far from controversy, which was in plentiful supply during the George Steinbrenner/Billy Martin/Reggie Jackson years. Messer usually treated Yankee conflicts with a see-no-evil attitude, if he didn’t ignore them completely.

On the whole, that’s a relatively small strike against a solidly professional play-by-play man who did such dutiful work in New York for more than a decade. He did the job, while never complaining about being the third wheel to Rizzuto and White. If nothing else, Frank Messer should be remembered for that.

Thanks for the insight. I grew up with The Scooter and Bill White. I did not know much about Messer and If I was watching the Yanks from 1980 - 1984 as a kid I certainly don't remember voices. To think today's young Yes watchers and us included don't know who the hell we're going to be hearing on a series to series basis. On one hand you can't get too sick of one person but on the other hand you don't like seeing one or two of the rotating talking heads.

I'm a Yankee fan because growing up in upstate New York, we could get Yankee games on the radio -- No Mets (or even Red Sox, who have a big following upstate). So I grew up spending lots of summer nights in my room with Messer, White, and Rizzuto, eating peaches and listening in bed in the dark. I always pictured Messer sitting in the middle of the other two, even though the times that all three were on the air were infrequent. The three of them were the gateway to my Yankee fandom, and really my son's as well. Sure do appreciate this appreciation of Messer.

thanks for this! i definitely remember messer, as a kid, but probably more in name than voice & personality. i have tons of memories about rizzuto and white, of course.

Frank wasn't a guy to say anything too memorable or controversial. Just a smooth-voiced play-by-play guy. He knew he had personality surrounding him with Rizzuto and White and he just called the game and set them up.

It's perhaps even more amazing that it's been 25 years since Messar announced his last Yankee game -- but then I still remember when Rizzuto and Coleman did the games. My best memory of Messer is his call of the last pitch of Righetti's no-hitter (maybe because of its frequent appearance on Yes). That's probably about as excited as he ever got.

Good recall on the Messer call of Rags' no-hitter. Ive got to ask you: what were Coleman and Rizzuto like when they were together in the booth?

[8] I was still pretty young and don't remember much, but I do recall that looked forward to their play-by-play combo on the radio or TV and that I was impressed by the fact that they had both played for the Yankees during their glory years. (I had the misfortune of becoming a fan in the mid-1960's.)

Thanks Bruce. I loved Messer's smooth voice. I also remember him as the voice of reason and sanity between Scooter and White's stand-up routine. I was really disappointed when he left the booth.